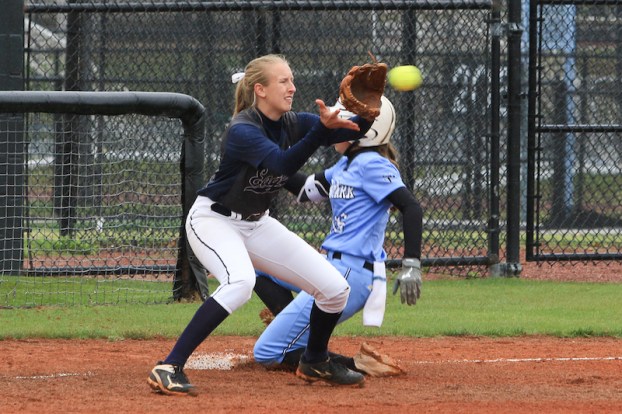 Spain Park will meet in the regional championship game today just a week after the Jags beat the Eagles to win the area championship. Today's winner advances to the state tournament. (For the Reporter/Dawn Harrison)

TUSCALOOSA – A rematch of the Class 7A, Area 6 Championship will determine the North Central Region on Friday, as three-time area champ Spain Park is set to meet runner-up Oak Mountain in the region final. The game is scheduled for 10:30 a.m. on Field 2 at Bowers Park.

Vestavia and Tuscaloosa County will meet in the losers’ bracket at 10:30 a.m. on Field 1, with the winner playing the loser of the region final at 4:30 p.m. on Field 5 to earn the second spot from the region.

Annabelle Widra carved up the Tuscaloosa County batting order, striking out nine and walking one to carry a no-hitter into the seventh inning for Spain Park. Teraney Eatmon broke up the no-hitter with a one-out single, but Widra kept the Wildcats scoreless, ending the game with her 10th strikeout of the night for the one-hit shutout.

Spain Park collected three hits through the first three innings, but a pair of double plays helped keep the Jags off the scoreboard. That changed in the bottom of the fourth when Mary Katherine Tedder doubled to center to lead off the inning and scored on a one-out Caroline Parker triple. Bailey Bowers followed with a base hit, and then Mary Kate Teague doubled to drive in Parker. Widra drew a walk to load the bases with one out. Taylor Harrington drove in all threw with a triple down the leftfield line to make it 5-0 Spain Park.

The Jags added two more in the bottom of the fifth on an error that scored Jenna Olszewski and Parker.

Maddie Majors led off the bottom of the sixth with a double to left, but was thrown out at third on a fielder’s choice by Tedder. Olzewski drew a two-out walk, followed by an RBI single from Parker to make it 8-0.

Parker led Spain Park with a 3-for-4 night, two runs scored and two RBI, while Tedder and Majors also had two hits. Harrington led the team in RBIs with three.

Oak Mountain put pressure on the Rebels early, taking a 1-0 lead in the first after Maddie Katona led off the game with a single to short and scored on an RBI base hit to center from O’Neill Robinson. In the top of the third, Robinson delivered a two-out double and took third on a wild pitch to set up an RBI single by Cassady Greenwood to make it 2-0 Oak Mountain.

Vestavia led off the bottom of the first with a pair of singles, but Abby Jones retired the next six in order. The Rebels took advantage of a pair of a hit, pair of errors and a sac fly in the bottom of the third to tie the game, 2-2. Kate Meloun scored the Rebels’ first run on an error, while Merritt Cahoon scored on Ashley Dieguez’s sac fly.

Vestavia pushed ahead, 3-2, in the bottom of the fourth. Sarah Cain doubled to lead off the inning and scored on a two-out RBI single by Meloun.

The Rebels pulled starting pitcher Jessica Perley in the fourth inning, but the Eagles found their rhythm against reliever Kate Nash in the fifth inning, pounding out five of their 10 hits in the game to regain the lead, 6-3. Katona and Jenna Galloway singled to start the inning, followed by another double from Robinson to tie it, 3-3. Greenwood was hit by a pitch to load the bases, then Abby Brown delivered a two-run double to left. Riley Sullivan later made it 6-3 with a two-out RBI single. Nash faced eight total batters in her 2/3 inning of work, allowing four runs on five hits before being replaced by Perley to get out of the fifth-inning jam.

Clara Fuller, who took over for Jones in the fourth inning, closed out the game for the win and was perfect through her 3 1/3 innings of work. Only one of Jones’ three runs allowed was earned. She gave up five hits in her 3 2/3 innings. Nash took the loss for Vestavia.

Robinson and Katona each hit 3-for-4 for the Eagles, while Robinson and Brown led the team with two RBIs apiece.