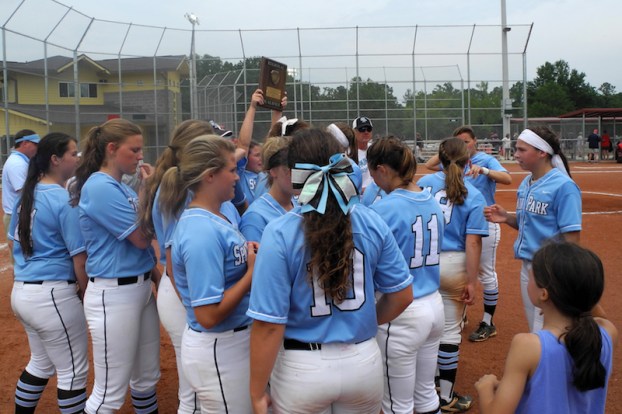 Spain Park won the regional championship on Friday and has cemented its spot in the state tournament next week. Contributed

TUSCALOOSA – Spain Park is bound for the AHSAA Class 7A State Softball Tournament once again. The Jags run-ruled Oak Mountain for the third consecutive postseason meeting, shutting out the Eagles, 10-0, on Friday, May 12 to win the North Central Region championship at Bowers Park.

Oak Mountain was later eliminated in the second qualifier game by No. 10 Tuscaloosa County, 3-1.

“It’s surreal right now. We’re just enjoying this because those teams (Oak Mountain, Tuscaloosa County and Vestavia Hills) can hit it,” said Jags head coach C.J. Hawkins. “They can play defense and give everybody a nightmare. That’s why they’re here at regionals. I hate it that two of us have to go home, because all four deserve to be at the state tournament.”

It is the second-straight year the Jags have advanced to the state tournament and third time in program history. After finishing runner-up to Sparkman last season, Hawkins said the team has been eyeing its return all season.

“Since May 20, 2016 that’s all they’ve talked about is getting a chance to be in that final game. It’s going to be a tough battle,” Hawkins said. “It’s really hard to win it in the loser’s bracket. If we can stay in the winner’s bracket, we have a chance to win it.”

The second-ranked Jaguars will meet the South Central runner-up (Auburn or Enterprise) in the first round of the tournament on Thursday, May 19 at 9 a.m. at Lagoon Park in Montgomery. The winner will meet the winner of No. 1 Sparkman (North runner-up) and No. 4 Baker (South champ) at 4 p.m. Thursday.

The other four teams in the 7A tournament No. 5 Buckhorn (North champ), No. 10 Tuscaloosa County (North Central runner-up), Prattville (South Central champ) and the South runner-up (either Mary G. Montgomery or Fairhope). The state championship game is scheduled for 5:30 p.m. Friday

The Jags, which started the season 22-0, will enter the tournament on a five-game win streak after going 11-5 in April. Sitting at 45-7 on the year, Spain Park is four wins shy of tying the program record for wins.

“I think everybody is doing what they’re supposed to be doing and they’re executing. We’re zoned in at the task at hand, and when we have the task at hand, we’re on point. We’ve been pretty tough to beat all year,” Hawkins said.

Annabelle Widra allowed only four hits in the shutout for her fourth-consecutive win. The previous night, she tossed an 8-0 one-hit shutout to beat Tuscaloosa County in the region semifinals.

Oak Mountain came out fighting, as leadoff hitter Maddie Katona fouled off seven straight pitches before being called out for hitting the ball with her leg as she left the box. The play seemed to set the tone for the first two innings, as each team had its share of miscues. O’Neill Robinson tried to spark Oak Mountain in the top of the third, delivering a two-out double, but was left stranded.

Spain Park took a 3-0 lead in the bottom of the third with Taylor Harrington and Maddie Majors leading off the inning with back-to-back singles. Mary Katherine Tedder drove one up the middle to score Harrington from second to make it 1-0 SPHS. Jenna Olszewski was hit by a pitch to load the bases, and then Caroline Parker singled down the right field line to bring in two more.

The third inning was the wakeup call for the Jaguar bats. Spain Park added five runs in the fourth inning and two more in the fifth to end the game. Ten of their 15 hits came in the final two innings.

“Our hitters made adjustments at the plate and stuck to the game plan that we had. They were disciplined and they played it the way we needed to come up with clutch hits in key situations,” Hawkins said.

In the fourth, Harrington and Majors picked up one-out singles, followed by walks from Julianna Cross and Tedder. Olszewski followed with a two-run single down the right field line. Parker and Bailey Bowers also each singled in a run to make it 8-0.

Spain Park used four straight hits in the bottom of the fifth to enact the run rule, beginning with Widra. Harrington followed, and then Majors and Cross each drove in a run.

Majors finished the game hitting 4-for-4 as the leadoff with two runs scored and an RBI. Parker and Harrington each hit 3-for-3. Parker’s two RBIs led the Jags, while Harrington scored a team-best three runs. Tedder and Olszewski each drove in two runs.

Oak Mountain took a 1-0 lead in the bottom of the first, scoring on an error at third base on a ground ball by Abbi Brown. However, that was all the only run of the day for the Eagles, which end their season with a 24-18-2 record.

Tuscaloosa County used a sac fly by Briana Chappell in the top of the second to tie the game, 1-1.

Oak Mountain left the bases loaded in the bottom of the second and stranded one runner in both the third and fourth innings.

A walk and error set up a two-run single by Katie Atkins to give T-County a 3-1 lead in the top of the fifth. Oak Mountain hit into a double play in both the fifth and sixth to keep the Wildcats in front. The Eagles were unable to push across a run in the seventh, despite a one-out double by Jenna Galloway and walk by O’Neill Robinson.

Abby Jones allowed only three hits, walked two and struck out five in the loss. All three Tuscaloosa County runs were unearned.