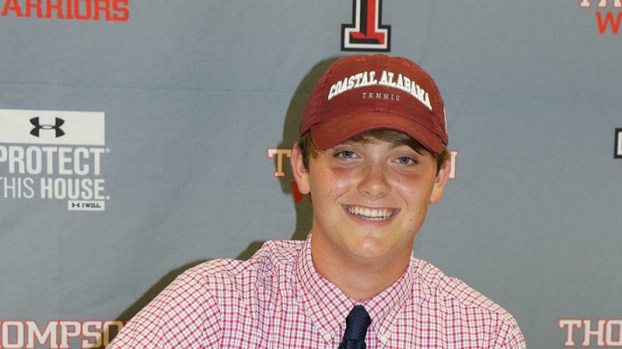 ALABASTER – When he was in seventh grade, Thompson High School senior Nathan Walton brought a surprising request home to his parents.

“He said ‘I want to try out for the tennis team,’ which was a little shocking to me because he didn’t play tennis. I don’t even think we had a tennis racquet, and it was three weeks before tryouts. We may have had one collecting dust in the garage somewhere,” Walton’s mother, Jan, said. “But we got him some lessons, and he made the team.”

From there, Walton continued to hone his skills on the court, saw plenty of success with the Warriors’ tennis team and eventually made school history.

In late April, Walton became the first-ever member of the THS boys’ tennis team to sign a collegiate scholarship when he inked with Coastal Alabama Community College.

“He has found a passion in tennis that I love seeing in him. He loves that sport. And Nathan, I will say you didn’t just follow your dream, you chased it, and we are so, so proud,” Jan Walton said. “Thank you so much to (THS Principal) Dr. (Wesley) Hester, (ACS Superintendent) Dr. (Wayne) Vickers, to all the administrators, to all the players, to all the coaches for investing not only in this tennis program, but investing in our kids.”

“He is as good as gold, and there aren’t many people like him. Coastal Alabama is getting the best of Alabaster,” said THS head tennis coach David Easley. “He knows, tennis wise, he’s got a long way to go, but he will get there because he works so hard. He’s honestly one of the best kids I’ve ever met. I’m not just proud of him, I’m genuinely happy for him.”

Over the years, Walton has made an impact on the area’s tennis community, and will leave a legacy with the school’s tennis program.

“I consider myself fortunate to have had the opportunity to coach him for the past six months, but he was there before I ever came along,” said Clint Johnson, co-owner of the Pelham Edge Tennis location. “He did all the work himself, and he gets all the credit. It’s been an honor to get to coach you.”

“We’re so honored that Nathan has chosen to attend Coastal Alabama Community College. It’s obvious that he has a very structured and defined family support system,” CACC tennis coach Dr. Richard Delaney wrote in a statement read during the signing ceremony. “There are several reasons that we’re excited about Nathan. Not only is he an awesome athlete, in addition he is of outstanding character and is a strong student. He will join a team of motivated, sound moral character teammates.”

For Nathan, moving off to college will not end his involvement with the THS program.

“Thanks to everyone for always supporting me and always believing in me,” he said. “Thanks to all my coaches and my teammates. I hope to come back and support y’all next year.”