Approaching is that definitive time of year between Mother’s Day and Father’s Day when the odoriferous Pancratium fluitans blooms begin to appear in the downstream waters of Buck Creek.

The beloved Cahaba Lily, also known as Hymenocallis coronaria, is definitely a mouthful times two and grows only in places with a swift shallow water current and direct sunlight. 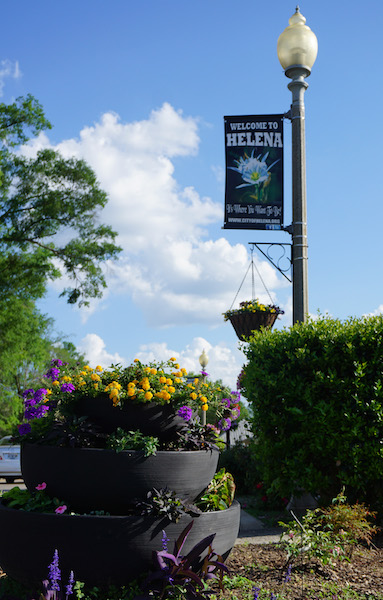 In Old Town Helena, May is the month set to be “busting out all over.­” At a recent city council, the Cahaba Lily was proclaimed the official Aquatic Flower and the Red Horse Fish the official fish of the city of Helena. (Contributed)

Online sources say that each bloom, in its beauty for only one day, may span the size of a hand.

The Cahaba Lily opens late in the day in preparations for pollination by the Trumpet Vine Sphinx, a nocturnal hawk moth.

Just down the way, West Blocton has held an annual festival in late May since 1990, where a Cahaba Lily Queen is crowned, then wades into the shoals to be photographed with the lilies.­

City banners with their Cahaba Lily motif in Old Town fly over the area where the Helena Beautification Committee has recently been hard at work updating the landscape and installing new plantings.

The crape myrtles have been removed by city workers and the strip where they grew has been re-soiled and custom pole planters built by Brian Puckett­ are now in place. These planters are deep coconut liner containers which can hold about 26 plant varieties. You can already view assortments on their way to becoming lush fountains of color and texture.

Along the parking spaces and in the corner beds are Earth-Kind Roses.

Earth-Kind is a special designation given to select rose cultivars by the Texas AgriLife Extension Service through the Earth-Kind landscaping program. It is based on the results of extensive research and field trials and is awarded only to those roses demonstrating superior pest tolerance, combined with outstanding landscape performance.

An accompanying tag, which can be scanned by smartphone, imparts information about each rose.

Perennials are also interspersed in the corner beds and Helena City Hall planters have been re-planted for spring.

First Friday in May will take place May 5 with Buck Creek Festival following the weekend of May 13 and 14.

Remembering the life of Gerald Waldrop

By LAURA BROOKHART / Community Columnist As a friend of the late Gerald Waldrop, I recently came across this writing... read more