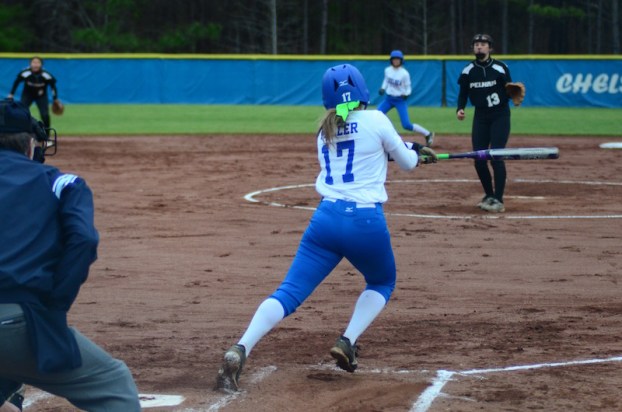 Chelsea’s Allie Miller picked up six hits and four RBIs in the Hornet’s three wins in a row to help lead the team to a regional championship this past weekend. (Reporter photo/Alec Etheredge)

TROY – It was a reversal of roles as the Chelsea and Helena softball teams traveled to Troy for softball regionals this past weekend. A week before we saw the Huskies come out on top as area champions, but this go around that completely flip flopped as the Hornets pulled off a win over Helena to cement themselves as region champions as they claimed a spot in the state tournament.

Things started off with a bang to open regional play as Chelsea and Brookwood needed 10 innings to decide who would play from the winner’s bracket and who would have a long road in front of them in the loser’s bracket.

The Hornets started the game with the first run in the top of the first inning and held that lead until late in the game before Brookwood tied things up at one apiece in the bottom of the fifth. Chelsea answered right back in the top of the sixth with their second run to take a 2-1 lead, but in a back-and-forth battle, Brookwood answered right back in the bottom half to tie things up yet again.

They held the 2-2 tie until the top of the 10th when Sarah Cespedes, who is one of the team’s strongest leaders both in the circle and at the plate, took a full-count pitch and drove it deep over the center field wall to break the tie and give Chelsea a 3-2 lead. The Hornets followed with two straight singles before an Allie Miller ground out drove in their fourth run.

Chelsea was able to hold Brookwood scoreless in the bottom of the 10th to pick up a game one win.

Brooke Burback and Miller led the Hornets at the plate both picking up three hits apiece and one RBI. Cespedes went al 10 innings in the circle allowing two runs, nine hits and two home runs while striking out six.

Chelsea was able to come from behind in the second game of regionals to remain in the winner’s bracket making their chances better and better of advancing to state.

After falling behind 1-0 in the top of the second, the Hornets answered with two runs in the bottom of the third three consecutive big hits. Skylar Baker led things off with a single, which was followed by a triple from Miller who came through again to tie the game. Burback followed with a single to give the Hornets a 2-1 lead as that duo continued to impress.

Kathryn Shoop extended that lead in the bottom of the sixth as she singled to left field driving in two more runs to put Chelsea up 4-1. Cespedes pitched another strong game and gave up one more run in the top of the seventh, but was able to hold on for the win as the Hornets moved to 2-0.

Shoop had an impressive game in the batter’s box going 3-3 with two RBIs to lead Chelsea. Miller, with her triple, went 2-4 with an RBI and a run scored, while Baker went 2-3 with a run scored and Burback went 1-3 with another RBI.

The winner’s bracket championship was a very competitive affair between the Hornets and Huskies as they were meeting for the third time in a week.

It was the third inning that featured the game’s most excitement as Miller continued her hot tournament in the top half of the inning with a two-run shot over the right field wall to give Chelsea a 2-0 advantage.

Grace Robertson answered that shot and said “whatever you can do, I can do better,” as she drove a ball over the center field wall for a two-run homer of her own to knot things up at two apiece.

This tie held strong until the top of the fifth when Burback drove in Baker with a sacrifice fly to center field. That was followed by a single from Camryn Smith that drove in Miller who had stolen second and moved to third on the sac fly. Chelsea had broken the tie and taken a 4-2 lead. Cespedes, who was clicking on all cylinders in the tourney, finished the game off without allowing another run as the Hornets went on to take the regional championship and advance to the state tournament this week.

Miller led the team with two more RBIs after going 1-4 at the plate. Smith went 2-3 and added an additional RBI, while Burback added the fourth RBI after a 1-2 day.

Chelsea will now travel to Montgomery to take on Walker at 9 a.m. in the first game of the state tournament. They are four wins away from repeating as state champs.