Some months back, a unique opportunity presented itself in the form of a morning spent riding with Theoangelo Perkins around his beloved town of Harpersville. By the way, if you ever have a chance to do such a thing – take it! His knowledge of the geography and history of one of Shelby County’s prettiest areas is like none other. In addition to being its native son, former mayor and proudest advocate, Theo is one of the most interesting and grandest examples of why living in this county is, simply stated, the best. 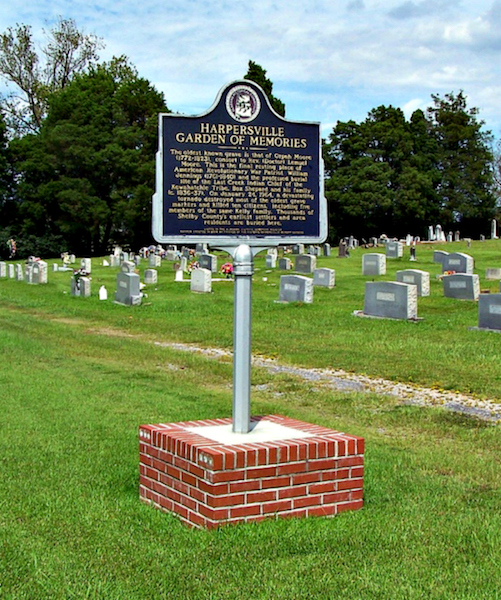 Harpersville’s Historic Municipal Cemetery has much history to tell. (Contributed)

For a history lover, driving by the more significant sites confirmed things either learned through oral history or read in various publications. However, his nod to the local cemetery was most intriguing – and led to further exploration. For some, hanging out in local (or not so local) cemeteries may seem a bit macabre or bizarre. But, it can be one of the best sources of local history around. For, it seems, that dead men – and women – DO tell tales.

The Harpersville Garden of Memories Cemetery, or the Municipal Cemetery as it is often called, spreads over 4 acres along Highway 25 just as you enter the town. A historic marker gives a quick overview of some of the more notable residents. Among the oldest graves are those whose births pre-date the settlement of Alabama. A walk around the grounds introduces you to early times with graves of notables like William Jennings who fought as a patriot in the Revolutionary War. His death in 1840 only predates the Civil War by twenty-one years. It illustrates the relatively short time between America’s fight for independence and the devastation of a country divided against itself.

Another of the cemetery legends goes back to the native people who established communities prior to the earliest American settlements. Theo explained that the last remaining chief of the Kewhatchie Tribe of the Creek Indians, Boz Shepard, and his family are buried in the Garden of Memories. If you ever took Alabama history in elementary school, you will remember that the Creek tribe was the largest and most powerful of the indigenous people in the southeast. Kewhatchie is now long gone, but was an early Creek settlement in the vicinity of Harpersville during the 1700s and 1800s.

Other graves will tell stories of devastating tornadoes that wiped out entire families – something we know all too well during the spring and fall turbulent weather seasons. Other wars are mentioned here – evidenced by dates in the 1860s, 1917-18, and 1941-45. Looking at them reminds you of the words “wars and rumors of wars” and elicits a melancholy feeling of lost opportunities.

Harpersville isn’t the only historical cemetery in the county. The Confederate cemetery near Shelby Springs, just outside Columbiana, is also worth a visit. It is the final resting place of soldiers nursed at the nearby hospital after the battle of Vicksburg. And, the National Cemetery in Montevallo gives those who served our nation in modern days a final resting place. If you are willing, there is much to be learned in these quiet places.

By RENE’ DAY / Community Columnist The nice thing about growing up in Shelby County is that, as the years... read more