MHS school, stadium get spruced up in ‘Give Me Five’

As part of a Shelby County Board of Education program called “Give Me Five,” students spent a recent Saturday picking up, scrubbing up and sprucing up the home of the Bulldogs. 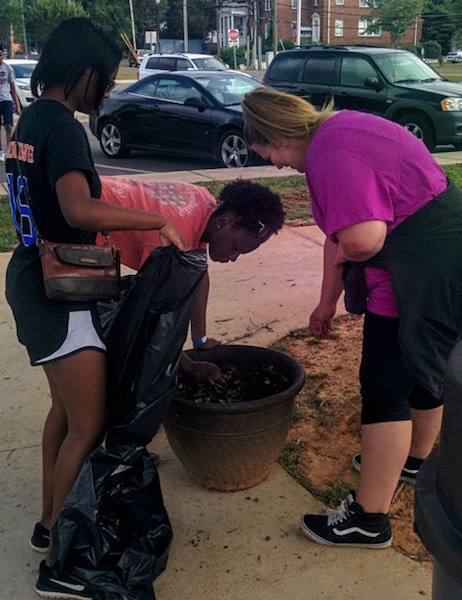 Senior Matthew Allen explained why he tackled the gritty job of cleaning the football stadium and the concession stand. He cited a Bible verse as part of his motivation: I Corinthians 16:14 “ … Do everything in love … ”

“I am going to stay here. I am going to (University of) Montevallo. This is my home,” said Allen, who also volunteers at the teen center and helps with Farm Day. He agreed with the suggestion that he and his hard-working classmates performed sort of a reverse senior prank by leaving the school brighter and cleaner than they found it.

“I want to leave my mark on the school … in a good way,” agreed sophomore Trishton Johnson, whose work included sanding and refinishing picnic tables between the main school and the Alice Boyd Building. “We cleared trash from behind the bushes and pressure-washed the walks,” he said.

Diego Martinez, who is headed to Troy University for football and a nursing degree, called his mother “my number one motivator.” He led a group of seniors and juniors who cleaned up the Dawg House, the field house at the football/soccer stadium. Martinez pronounced the soccer teams “really messy. But we cleaned it up really well.”

Students also cleared out trash around the stadium and school, planted flowers and cleaned the ticket booth. The messiest job, according to the service day sponsor, Lee Pastor, was the concession stand.

“It took five bottles of Spic ’n’ Span,” she said.

Pastor, in her fifth year at the school, teaches AP government, economics and psychology.  The school district policy requires each student to complete five hours of community service every school year.

“Many of these students do a lot more than five hours,” she said. “I am very proud of them.”

By NANCY WILSTACH / Community Columnist From the pens of Philip McEntee and Pauline Beach comes another hit musical, “The... read more