From the pens of Philip McEntee and Pauline Beach comes another hit musical, “The Root Children,” opening soon at that theater near you — and starring a lot of familiar faces.

How do I know it is going to be a hit? Well, the McEntee-Beach duo has been putting them together for 10 years, and they haven’t missed yet. 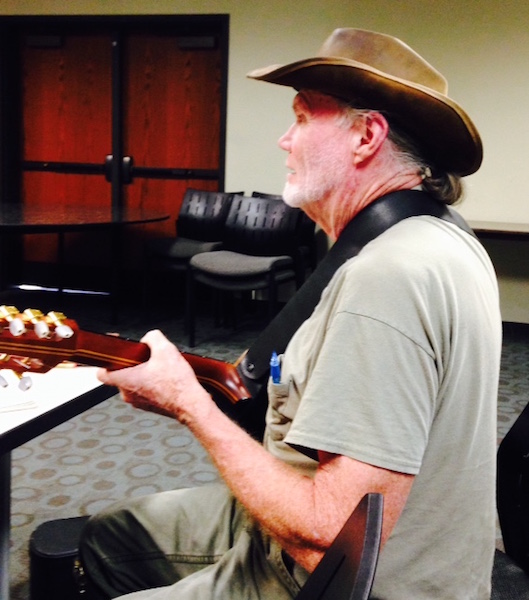 The house is packed for every performance, and the applause is deafening.

The annual Children’s Musical Theatre Workshop is about to get underway in the Parnell Memorial Library Theatre, following auditions the last two Tuesdays.

There are no broken hearts after these auditions because every child who tries out gets a part.

Participation is free, thanks to the Parnell Memorial Library Foundation. McEntee and Beach audition each child to find out who can sing and dance, and who is not too bashful to act out a funny scene.

Two youngsters who auditioned in the first casting call did some lively dancing after a rendition of “Happy Birthday.”

Then, McEntee introduced them to the concept of mime.

“You, David, are a lady bug. But you have no spots. You want spots. Alexandria, you are going to put spots on David, but it tickles. It tickles a lot,” McEntee said, and then he turned it over to the kids.

Silent giggles, squirming and much stamping on of spots ensued. Then, McEntee strummed his guitar a few times and pronounced their performance “outstanding,” and assured them that they would be in the musical.

He explained his method: “I have written a play,” he said. “Some characters—we can have more.”

For example, two cuddly bears could be six cuddly bears if needed. So, having more children than anticipated is no problem.

The worst scenario is too few actors, Beach said.

“Early on we had only five,” McEntee said. While he was struggling with a challenging rewrite, those five were telling their friends what fun this was.

“So we wound up with a full cast,” Beach said.

That was in the days of the city’s old, cramped library and performances in a meeting room.

“It is a whole different life now,” Beach said, “with the library foundation—and an actual stage.”

The cast is drawn from children between 6 and 12 which means that some Montevallo youngsters who dearly love acting eventually age out of the program.

Katie Ozley, a seventh grader, has had a six-year career with the workshop.

“I have been a bumblebee, a flower, a Roma bean, a crab, a kangaroo and, last year, the Scarlet Queen,” she recalled. Now, instead of being on stage, Katie is a teen helper.

This group of workshop veterans helps with sets, rehearsals and music. Her mother, Lorrie Ozley, a member of the foundation board, is the workshop administrator, a job she has held for three years. Before that she was a parent volunteer.

Performances of “The Root Children” are at 7 p.m. June 15 and 16 in the Parnell Memorial Library Theatre. Don’t miss it—the whole town will be talking about it.

By NANCY WILSTACH / Community Columnist You might have expected a classic car buff like Steve Gilbert to wonder why... read more