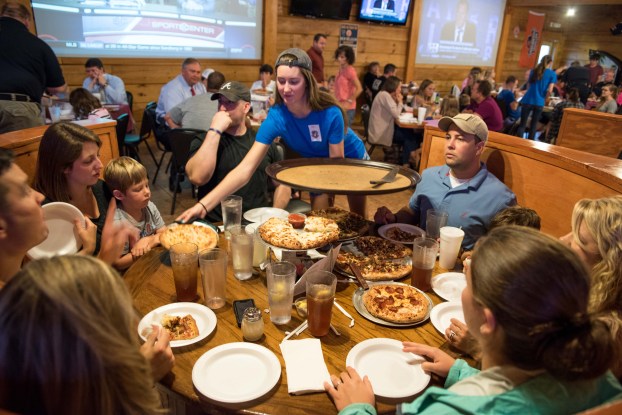 Alabaster police officers and their families enjoy dinner at Buck Creek Pizza and Wings in Alabaster during a July 2016 event in their honor. This year's event will be June 22. (File)

Across the nation, public sentiment seemed to be negative toward law enforcement officers, but central Alabama was a different story.

“The nation’s negative perception towards law enforcement seemed to have reached its peak. As a spouse of a law enforcement officer, I searched for what I could do to support the officers of Alabaster police,” said Bedsole, whose husband, Russell, is an Alabaster City Council member and a Shelby County Sheriff’s Office deputy. “I won’t forget as last year’s event unfolded seeing all of the citizens of Alabaster standing in the rain welcoming and in some cases applauding the officers as they arrived with their families.”

While the July 2016 event at Buck Creek Pizza and Wings served as a thank-you to Alabaster’s police officers, it also had a deeper meaning, Bedsole said.

“Through this event, it’s not really that we are trying to say thank you, although they deserve all the thanks that we could give them. We are trying to show them that we are supporting them when it may feel as though there are people in this country that have turned their backs on them,” Bedsole said. “The community response at last year’s event was a fitting tribute to how our citizens feel about our officers. Young and old, African-American and white, all stood in the rain in support of our officers.  This is Alabaster and I would expect nothing less from our community. That’s just who we are.

“I immediately knew that being involved with this event would be something that I would participate in again in the future,” she added.

Bedsole followed through on her plans, and has organized a second community event to support the city’s police officers on June 22 from 6-8 p.m. at Buck Creek Pizza and Wings. Just like the first event, local residents will circle the restaurant while Alabaster officers and their families enjoy a free meal.

Buck Creek Pizza and Wings owner Hunter Spradlin will close the restaurant to everyone except Alabaster police officers and their families, and the meals will be paid for by donations. During the event, volunteers will be accepting gifts and gift cards to give away to the officers, and will be accepting donations to help cover the cost of the officers’ meals.

“The men and women that serve us daily by wearing the badge are some of the most humble and modest people I know. You could tell they were a little uncomfortable with the attention because they are so accustomed to serving others and not being served themselves,” Bedsole said of last year’s event. “But by the end of the night, it was clear they enjoyed being in an atmosphere where they enjoyed a great meal and they knew they were loved.”

From Staff Reports The University of Montevallo has been named a College of Distinction for the sixth consecutive year. UM... read more