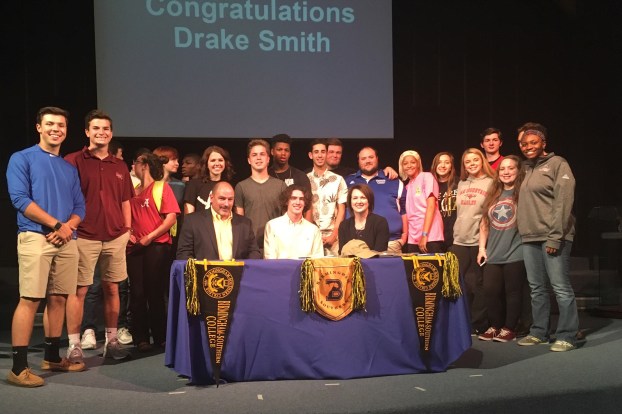 Drake Smith, pictured with his family, coach and classmates, signed his letter of intent to join the BSC track team on May 16. (Reporter photo/Amalia Kortright)

ALABASTER -Kingwood Christian School senior Drake Smith signed his letter of intent to run track for Birmingham-Southern College at a ceremony on Tuesday, May 16.

According to Smith, he had only been on the KCS track team for one year, and also played football and soccer.

“I went here from the third through eighth grades,” Smith said. “I moved back here this past September, and I had the opportunity to finish what I started.”

“Over this past track season, Drake has been somebody that has definitely left a mark on the (Alabama Independent School Association),” Hobson said. “Where Drake would run was never in question, and he quickly proved why he deserved to be there.”

According to Hobson, Smith’s biggest accomplishments came when he consistently led his relay teams to consistent top 10 finishes throughout the season and a top five placement during the 4×200 Meter Relay at the AISA Outdoor Track and Field State Championship. His team also placed third for the 4×400 Meter Relay.

Hobson said Smith consistently finished in the top eight in the 100 Meters with an average time of 12.2 seconds. For 200 meters, Smith averaged 25 seconds.

Despite having never jumped high before, Hobson said Smith “stepped out of his comfort zone,” and eventually placed eighth in the AISA State Championship with a height of five feet and four inches.

Hobson said Smith’s original plan was to attend the University of Alabama in the fall, but not play any sports. Smith quickly changed his mind after he came into contact with Birmingham-Southern Track Coach Kenneth Cox.

“When we got back from State, I had the chance to talk to Drake about his next steps in life. As we talked, he told me how much he was going to miss being involved in sports when he got to Alabama,” Hobson said. “As we talked, he told me if I heard of any colleges that still had any openings to tell them he would be interested. Less than a week later, Coach Cox decided to meet with Drake. Later that Monday afternoon, the conversation turned from missing sports and athletics at Alabama to an offer to live his dream and run track in the NCAA for Birmingham-Southern.”

Smith was awarded $17,000 per year in scholarships.

“I want to thank God, my family and Coach Hobson,” Smith said. “I want to thank (Principal) Ruth Gray, especially. She went above and beyond to put this ceremony together, and she’s been a really great help through all of this.”

By Alec Etheredge | Sports Editor HOOVER –  Warming up a few bays down from Gus Malzahn on the driving... read more