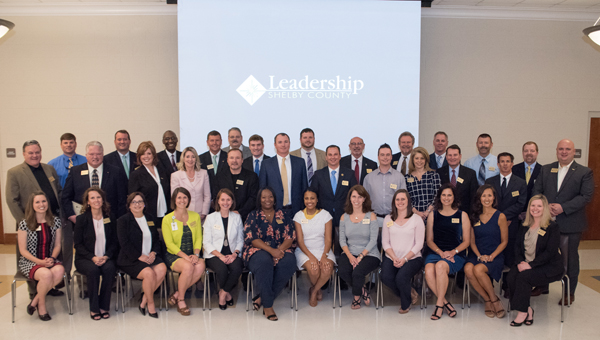 Thirty-seven graduates of Leadership Shelby County were recognized at a ceremony on May 16 at Jefferson State Community College’s Shelby-Hoover Campus. (REPORTER PHOTO/KEITH MCCOY)

HOOVER – The Leadership Shelby County Class of 2017 is already helping its community.

The projects included Polly’s Hope, which will provide material items to children placed in emergency care; The Children of Domestic Violence to benefit youth who have been exposed to domestic violence; Discover Shelby Volunteer Network, which is a social media platform to connect volunteers to service opportunities; and BackPack Buddies, which provides food to children in the county who are going hungry or who are food insecure.

The invocation was given by Calvin Gunn, LSC Class of 1997.

After the class project presentations, diplomas and alumni pins were presented by Bridgette Jordan Smith, president; and Tom Sanders, president-elect.

Then, the gavel was passed from Smith to Sanders, signaling the end of Smith’s two-year tenure.

“It has been totally amazing,” Smith said.

“I will try to follow along in your worthy footsteps,” Sanders said. “I want to thank all of you for your willingness to be a leader.”