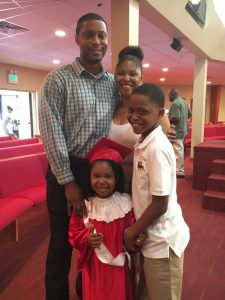 The Pelham Board of Education hired Jerone Wiggins to fill the role of assistant principal at Pelham High School. He is pictured with his wife Tamika and their two children, 10-year-old Peyton and 5-year-old Harper. (Contributed)

The Pelham Board of Education approved the hire of Jerone Wiggins to fill the role of assistant principal at PHS at its April 25 meeting. Wiggins is set to begin his new role in the third week of June.

The position was left vacant after former assistant principal Amanda Wilbanks became principal of the school. Former principal Jason Yohn transitioned to a position in the Pelham City Schools Central Office where he is currently working on special projects and district operations.

“I’ve been saying this a lot lately, but I’m excited,” Wiggins said. “This is a wonderful opportunity that doesn’t come along too often. I’m very appreciative of this opportunity and I will be 100 percent invested in the process.”

Wiggins is a Birmingham native. He grew up in East Lake and graduated from Huffman High School in 1995. He currently lives in Roebuck with his wife, Tamika, and their two children, 10-year-old Peyton and 5-year-old Harper.

Wiggins said he and Wilbanks have already begun discussions about what projects he could take on in his new role.

“We’ve discussed the idea of me leading a mentoring initiative for at-risk males,” he said. “That’s something that I have done before. I want to reach out to the kids who are falling through the cracks, those with behavioral issues, those who feel left out or excluded and get them back on track. I want to be somebody they can look up to, talk to and trust.”

Wiggins said he also plans to tackle tardiness. About 15 percent of PHS students have a history of tardiness, he said. He plans to develop a strategy to address that issue.

Wiggins comes to PHS with 13 years of experience as an educator. He spent 10 years as an English teacher and the last three years as the assistant principal of W.E. Putnam Middle School in Birmingham.

He graduated from Miles College in 2004 with an undergraduate degree in secondary education and language arts.

PELHAM – With the city’s current business license moratorium set to expire on May 31, the Pelham City Council conducted... read more