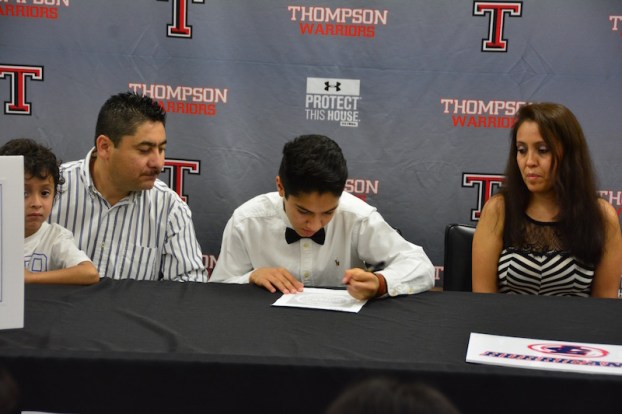 ALABASTER – Signing ceremonies seem to be the norm at Thompson High School these days as the school is churning out great athletes to the next level.

On Monday, May 15, another one of those top athletes signed to take that next step and continue playing the sport they love at the college level. Daniel Basave, a senior this year on the boys soccer team, signed his letter of intent to join Louisburg College.

Louisburg is a junior college located in Louisburg, North Carolina and has been a program on the rise the last three years. In 2015 they ended the season as the JUCO National champions and have also reeled off three consecutive 20-win seasons.

That’s what awaits Basave in the near future, but Monday was all about the then and now as he celebrated the great achievement with his mother and father on each side of him.

“Today is about recognizing Danny and his accomplishments,” Thompson head coach Rusty Cowley. “I speak for all of us that we are not only extremely proud of you not only for your achievements on the field, but also going from here and being willing to take the risk of moving on to the next level.”

Basave clearly had an impressive run with the Warriors as he led Thompson to a record 15-6-2 and 3-3 in area play during the 2017 season to just miss out on the playoffs. In a tough area that features teams like Vestavia and Hoover a .500 record is something to be proud of and shows Basave was one of several to help put this Thompson soccer program on the rise.

“This is my second year here and I didn’t know I would be able to accomplish this when arriving,” Basave said. “I’m really happy, but I’m also 10-times as sad because I’m leaving.”

After giving this speech, Basave set back down and gave his mom a hug, who couldn’t help but be overcome with tears of happiness at this unbelievable achievement by her son.

“It really sets an example for the kids to come after you about what they can potentially do,” Cowley said. “Regardless of you leaving us now, you are going to have a really big impact on the rest of these guys whether you realize it or not.”