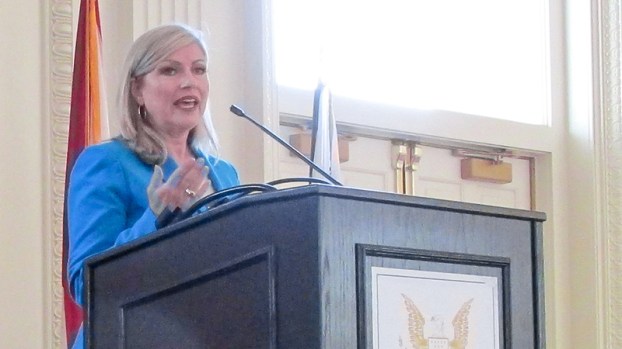 Ladun was featured speaker at the third annual National Day of Prayer Breakfast at the American Village in Montevallo on May 18. The event was sponsored by the Colonial Chapel Board in partnership with American Village.

Ladun said she had to learn to dance in the rain when the storm of cancer came.

“There was a time I began to think that God had a mission for me,” she said. “I had an aunt who served as a missionary in Africa, and I thought maybe God wanted me to serve in a similar way. One month later I was told I had cancer, and I now had a mission to get well and to help others.”

“The storms teach us to reach up to God and not be afraid no matter what we face,” she said.

She was strengthened during her cancer treatment by remembering what her mother had written to her in college.

Ladun reminded her audience of the so called “butterfly effect.”

“Some scientists believe that when a butterfly moves its wings it can ultimately affect weather patterns on the other side of the world,” she said. “I believe what we do here this morning can affect countless lives in other places. Encouragement literally means ‘to give courage to others,’ and all of us can be encouragers.”

Ladun said Christians ought to pray when they see things that are wrong, but that they must also do something to help others.

She told about “Mama Lois” Coleman who had a heart for street children and though in her 60s at the time, decided to open a home in Fairfield for girls where they could be loved, encouraged and tutored.

“Mama Lois is in her 90s and going strong,” Ladun said. “Twenty-four girls now are cared for at Grace House Ministries because one lady had a burden to help others.”

“He was leaving Lakeshore Rehabilitation Hospital in a wheelchair and the anchor asked him what he planned to do,” she said. “McNeal said, ‘God has a plan for my life and I’m going to help him in it.’”

“There are people who need you right now, so join me on a mission,” Ladun said. “The happiest people are those who give back to others as they try, with God’s help, to give courage to others.”

County senior picnic set for May 24

By EMILY REED / Special to the Reporter MONTEVALLO – The annual Shelby County Senior Picnic is expected to draw a... read more