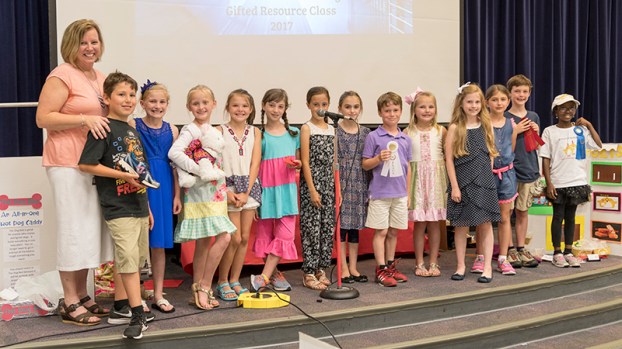 ALABASTER – Creek View Elementary School gifted student Faith Hall was crowned the winner of the school’s “Shark Tank” innovation and invention competition for working to solve a real-world issue many people face on a weekly basis.

“I got the idea for my invention when we were at Chick-Fil-A and my sister almost spilled catchup on her clothes while she was eating chicken nuggets,” Hall said. “I wanted to figure out a way to help people so they wouldn’t spill catchup on their clothes.”

Her invention, called “The Ketch-ya Nuggets” solves the issue by containing the ketchup on the inside of the nuggets, thereby leading to a cleaner eating experience. During her presentation, Hall wore a hat and shirt displaying her company logo, handed out custom-made business cards and sales flyers and even distributed ready-to-eat samples of her invention.

Hall was one of 13 finalists in Melissa Foster’s gifted resource class Shark Tank competition, which was held on May 17 in the school’s lunchroom. Foster chose the 13 finalists from among 54 total inventions her students have been developing over the past few months, and the finalists’ inventions and sales pitches were judged by a panel of Alabaster community members during the May 17 competition.

During the final round, the kids used everything from poster-board displays to made-from-scratch commercials to promote their products in an attempt to convince the judging panel to invest in the products.

All finalists received certificates for reaching the final round, while the top three winners received ribbons donated by Flowerz ‘n More in Alabaster.

Liam Willey won second place for his invention “The Handy Hiker,” which is a walking stick featuring an umbrella, cup holder and even a small metal peg to help with stepping over mud puddles.

John Hallman Lightsey won third place for his invention “Guardian Chew,” which is a device designed to keep dogs from chewing on things. The Guardian Chew serves the same function as a muzzle, but does not completely restrict the dog from opening its mouth to eat.

The following other students also advanced to the competition’s final round:

-Ana Katkin, with her invention “Box Me,” a custom-made plastic bag designed to make it easier for kids to pack and throw away their lunches.

-Anna Kate Banks, with her invention “The Private Dresser,” which is a small, portable and easily constructed changing room designed for events such as dance recitals.

-Annalise Moody designed “The Fun-tastic Robot Dog,” which is designed to mimic the actions of a real dog with much less hassle. The dog is solar-powered and can be taught new tricks through coding.

-Billie Marie Defoor invented “The Buguum,” which is a small, silent vacuum attached to a glass container. The vacuum is used to suck up small pests in the house and either kill them or safely transport them elsewhere.

-Allie Grace Broadhead invented “The Wonder Walker,” which is a dog harness fitted with a GPS device designed to automatically walk a dog and track their location should they ever get lost.

-Jada Gonzalez invented “The Sock Wallet,” a compartmentalized mesh bag designed to keep socks together so they don’t get lost in the washer and dryer.

-Jose Bracamontes invented “The Shoe Lace Holder,” which is a set of Velcro strips attached to the sides of tennis shoes to keep the laces from untying during heavy activities such as soccer or recess.

-Kianna Oberlin designed “Get Up Animals,” which is a motorized basket designed to help elderly or disabled animals to get up stairways.

-Blakely Davis invented “Germs B Gone,” which is a flavored, non-toxic sanitizer designed to help parents keep their babies’ pacifiers clean while away from home.