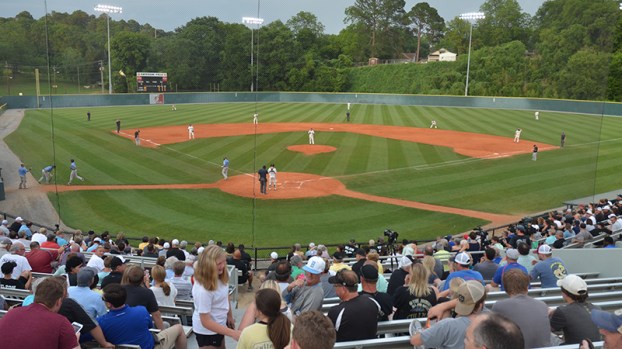 A large crowd was on hand to see the top two teams in 6A face off in game one of the AHSAA state championship series. Cullman dominated Helena 9-1 to take a 1-0 series lead. (Reporter Photo/Graham Brooks)

MONTGOMERY–Eight errors, two hits, one run and no strike outs and more than an hour weather delay basically sums up Helena’s 9-1 loss to Cullman on Thursday, May 18, in the first game of the AHSAA 6A State Championship series as the Huskies will need to quickly put the loss in the rearview mirror.

It was that kind of night for Helena, as the Huskies uncharacteristically committed careless errors that began to pile up to give Cullman starting pitcher Jacob Heatherly more than enough run support as he threw six and one third innings of two-hit baseball. He had no strikeouts and issued four walks, but in the end he had more than enough to get the win for Cullman.

Cullman started hot with a leadoff single in the top of the first inning. A sacrifice bunt then moved the runner into scoring position with one out. After a couple of walks by Helena starting pitcher Riley Davis the bases were loaded and the Bearcats were in business. However, Davis got a pop fly for the second out and it looked as though he might get out of the jam. Trent Price then hit a hard hit ball to second baseman Landon Green who made a great diving stop but had trouble getting the ball out of his glove and over to first base which resulted in an errant throw. After the throw sailed, Noah Fondren and Owen Lovell both came around to score to make it 2-0 Bearcats.

The next inning was another solid frame for Cullman as Caleb Lipsey began the inning with a leadoff single. After a sacrifice bunt, the bottom of the second inning became eerily similar to the first. A walk and an error loaded the bases for Cullman and Lovell took advantage by hitting an RBI-double to score Lipsey and Fondren to make it 4-0. Heatherly then hit an RBI-single to make it 5-0 to give himself another insurance run.

Helena’s lone run in the ball game came in the top of the third inning on a bases loaded walk that scored Brooks Brophy to cut the lead to 5-1.

That would be as close as Helena would get as the Bearcats scored in every inning except the bottom of the fifth to take game one with ease at Paterson Field in Montgomery. The game was delayed for more than an hour in the middle of the fourth inning because of lightning in the area.

Helena head coach PJ Guy was disappointed in the outcome but also optimistic that his team will come out ready to compete on Friday.

“Just congratulations to Cullman. They came out and had a good plan and got off to a good start,” Guy said. “They’re a really great team and I don’t think we played to our potential defensively tonight obviously. They’re the type of team where you can’t give them more than three outs and they made us pay for it so you got to give them credit for taking advantage of when we made mistakes. The good thing about tonight is that nobody can win the state championship tonight, so we’re going to get back home, get a shower, get our bellies full and get back early in the morning and come out here tomorrow and compete.”

Lipsey went 3-for-4 at the plate with two runs scored and Lovell finished with two RBIs to lead the Bearcats.

On the mound for Helena, Davis had his shortest outing of the postseason. Davis gave up seven hits, allowed three earned runs and issued four walks in three innings.

“Proud of the way we came out and swung it early and kind of captured momentum and I was really proud of our bats,” Cullman head coach Brent Patterson said. “I thought we laid off some good, close pitches that were down in the zone and he (Davis) all year has been so good at getting double plays and getting ground balls in big situations and I was just really proud of the discipline that we showed.”

Game two will be Friday, May 19 at 10 a.m. at Riverwalk Stadium in Montgomery. If necessary, game three will follow 30 minutes from the conclusion of game two.

Helena softball season comes to an end in 6A state tournament