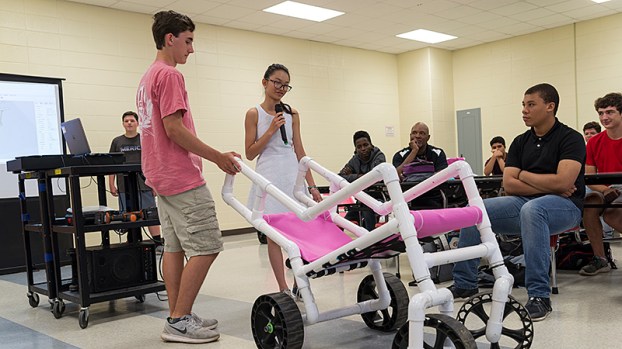 Students in Thompson High School engineering teacher LanJulian Pendleton’s class demonstrate an aquatic wheelchair they designed from scratch during a May 19 presentation in the THS lunchroom. (Reporter Photo/Neal Wagner)

ALABASTER – A pair of Alabaster girls who use wheelchairs for mobility soon will be able to more easily visit the beach and the pool, after Brian Copes’ and LanJulian Pendleton’s first-year engineering classes at Thompson High School designed and built several water- and beach-safe wheelchairs.

On May 19, the engineering students showcased their final products in the THS lunchroom after working on them for the past several months. Copes and Pendleton split all of their classes into two groups: One group was tasked with constructing a wheelchair designed to allow its user to safely enter a pool and the other group was tasked with building a wheelchair designed for the beach.

All of the chairs were designed by the students from scratch, 3D modeled on a computer program, constructed out of PVC pipe and tested before the May 19 presentation.

For engineering student Aubrey Copes and his teammates, the finished product was a long time coming.

“You have no idea. Seeing the finished product and knowing it will help people is one of the best parts of this school year,” Aubrey Copes said. “We have been wanting to see it finished since Mr. Copes first mentioned it in September.”

“It definitely gave us something to look forward to,” engineering student Travis Kennedy added.

Going from idea to finished product was admittedly lengthy journey for the first-year engineering students. When they began the class, many of them did not know how to properly measure using a ruler, Brian Copes said.

Over the course of the school year, the students learned the basics of the tools they would be using, passed a safety course for the tools, envisioned, designed and modeled their wheelchairs and then constructed them from the ground up.

The finished products all used sandtrack wheels designed by last year’s engineering students, and many of them featured adjustable heights, reclining seatbacks and buoyancy systems.

Now, the two students for whom the wheelchairs were designed will have an opportunity to test out the chairs and choose which ones they want to use, Brian Copes said.

“Next year, the students will evaluate this year’s designs to see if they can make improvements,” Brian Copes said, noting this year’s students followed a similar plan at the beginning of the 2016-2017 year. “Hopefully by the end of the year next year, we will have a prototype that we can start pitching to companies.”