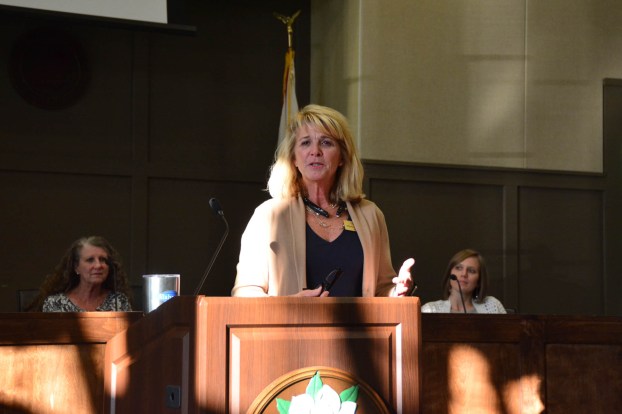 ALABASTER- The City of Alabaster held a Town Hall meeting to address mental health issues in the community and promote awareness on Wednesday, May 17.

Mayor Marty Handlon said the city hosted the meeting partially for National Mental Health Awareness Month, and partially in response to a recent tragedy that affected many members of the community. The point of the meeting, Handlon said, was to make the public aware of the mental health resources available to residents and their families.

“This year, I felt the city of Alabaster should do more than just declare the month of May as Mental Health Awareness Month,” Handlon said. “It really hit us when we thought about how we will remove the stigma and provide resources. We’re richly blessed with local professionals who live and work here.”

During the meeting, Alabaster City Schools Student Services Coordinator Dorann Tanner, resident Patrice Bright and Fire Chief Jim Golden shared their perspectives on the mental health in the community with the audience. A panel of eight mental health care professionals answered questions and addressed concerns from the audience.

Tanner, who shared a PowerPoint presentation from the American Psychological Association, spoke about mental health and youth in the U.S.

“It affects the whole community. Mental health issues are like any disease. They don’t just affect the patient. They affect the whole family,” Tanner said. “In our society, we want kids to just get over it. Kids can’t do that. We’ve got to help these kids learn to cope before they start struggling as adults.”

Tanner also went over drug abuse, different mental disorders, their causes, warning signs and treatments. She also spoke about how ACS handles any mental health issues that may arise with students.

“In ACS, we try to be proactive with mental health, and we partner with the Chilton-Shelby Mental health center,” Tanner said.

Resident Patrice Bright, who lost her daughter to suicide in April, said she was sharing her daughter’s story.

“Anna was beautiful, talented, tender and kind. It is our mission to make sure her death was not in vain,” Bright said. “We learned that she suffered deeply of a mental illness hidden behind an infectious smile.”

“We believe that she was heavily influenced by the show, ’13 Reasons Why,’” Brown said. “Our message to you all is to be kind, like Anna was.”

Bright also thanked the community for their outpouring of support in the past month.

“We felt your thoughts and prayers during this unimaginable time,” Bright said.

For the meeting, Golden gathered statistics about how suicide and self-harm directly affects the city. In 2017, there have been four deaths in Alabaster. According to Golden, the fire department has responded to 28 suicide-related calls this year.

“It’s very easy to think that nothing bad can happen here. We have to remember that there are people who need help,” Golden said. “Once in every 4.8 days, we’re responding to a call related to suicide.”

While she wished the meeting had a larger turnout, Handlon said it went well. She also said she hopes the information shared at the meeting will help prevent any similar tragedies from happening.

“You can’t have this much information and it not be beneficial. I would have loved to have seen more people, but these people were here for a reason,” Handlon said.

Special to the Reporter/ Erika Bibbs HELENA–A retirement celebration for Scott Knight was held on May 19, at Helena Middle... read more