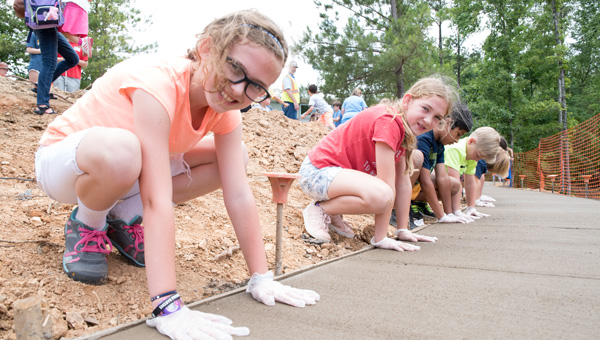 Third grader Sheridan Andrews and other Hilltop Montessori School students leave their handprints in a concrete walkway connecting the existing school to the campus’ Phase 3 on Thursday, May 18. (REPORTER PHOTO/KEITH MCCOY)

MT LAUREL – Hilltop Montessori School students will benefit from the new building under construction on campus, and they have left a mark on the facility that will outlive their time there.

Students pressed their handprints into a freshly poured concrete walkway on Thursday, May 18, that will connect the existing school to Phase 3, which will include a gymnasium/multipurpose space, teaching kitchen and more.

Hilltop Head of School Michele Wilensky said the theme of the event was “Let’s Pave the Way to Phase 3.”

“We knew we wanted to do something to celebrate,” Wilensky said about the idea.

Volunteers helped with the process, making sure the students were equipped with safety glasses, vests and gloves.

Preschooler Parker Brown served as honorary “Head of School” for the day after his parents earned him the title through their efforts in a school fundraiser.

Brown was first to press his hands into the concrete. He will also pull the fire alarm for the school’s next fire drill and serve as “King” of the upcoming Beach Party on Friday, May 26.

On Friday, Aug. 18, at the end of the first week of the 2017-18 school year, a ribbon cutting will be held to celebrate the official opening of Phase 3 and an old-fashioned sock hop will be held in the new facility, Wilensky said.

A groundbreaking ceremony for the $3.5 million project was held late in 2015.

Other amenities will include an apiary, butterfly garden and peace labyrinth.

The building will also house restrooms, locker rooms and showers.

Hilltop’s Phase 3 will be a way for the school to give back to the Mt Laurel community, as the facility will be available for use by community members outside of school hours.

Phase 1 of Hilltop’s construction was the main school building, which opened in 1996; while Phase 2 was additional classroom space completed about six years ago.

ALABASTER –Students at Thompson Middle School were recognized for several achievements at an awards ceremony in the TMS gymnasium on... read more