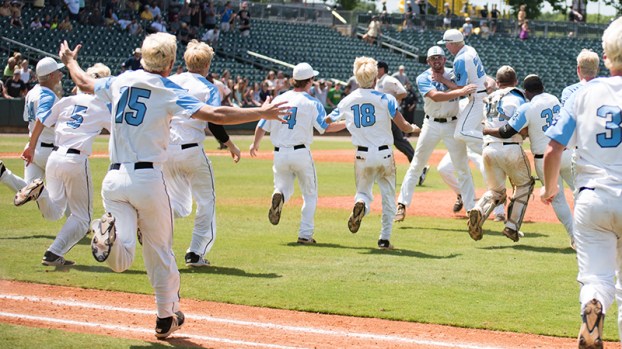 Helena celebrates after winning the AHSAA 6A state championship. The Huskies finished the season with a 38-6 record. (Reporter Photo/Keith McCoy)

HELENA–After finishing with a 38-6 overall record capped off with a 6A state championship, the Helena Huskies baseball team is being rewarded by at least one national rankings website.

MaxPreps, a national website which focuses on information, recruiting, news, video and discussion about high school sports, has Helena ranked No. 1 nationally in its latest computer rankings and No. 10 in the Xcellent 25 National High School Baseball rankings released May 22-23.

It was a special season for the Huskies, who now find themselves ranked among some of the best high school programs from across the nation after winning their first baseball state championship. This is a remarkable feat considering Helena’s first season as a program was just three years ago.

The MaxPreps national computer rankings are compiled by utilizing the huge number of game results stored in the MaxPreps database, according to the site. Generally, the more a team wins the higher the ranking, but the system takes into account quality wins (against other highly ranked opponents) and strength of schedule.

The computer rankings do not poll coaches, sportswriters or fans.

The MaxPreps Xcellent 25 poll on the other hand is the human poll. The MaxPreps writers’ determine who should be in the top 25 poll using a number of different factors including strength of schedule, talent, quality wins, returning starters and more.

Helena’s 2017 season highlights include an undefeated record in area play during the regular season, sweeps in each round of the playoffs prior to the 6A state title series, a 2-1 series win against Cullman for the 6A state championship and reaching 100 wins in program history with the final win over Cullman.

Helena’s state championship opponent, Cullman, was also honored in the national rankings, finishing No. 4 and No. 34 respectively.

Helena was the only high school team from the state of Alabama to finish in the top 25 of the Xcellent 25 National High School Baseball rankings.

For more information or to view the rankings, visit Maxpreps.com/polls/baseball/xcellent25.htm.