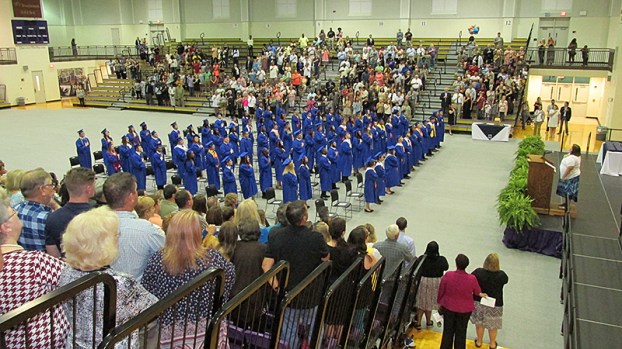 Seniors say the Pledge of Allegiance during the Montevallo High School graduation ceremony on May 22 in the Robert M. McChesney Student Activity Center on the campus of the University of Montevallo. (Contributed)

MONTEVALLO – A throng of excited parents and extended family gathered Monday night in the Robert M. McChesney Student Activity Center on the campus of the University of Montevallo to witness the spring commencement of Montevallo High School.

Principal Brandon Turner told graduates that he was grateful to have known them and proud of all of them.

“Your future will be filled with challenges and successes, with good days and bad days, but you’re tasked with making the world a better place,” Turner said.

Turner also praised the MHS staff whom he described as “involved, caring and motivated.”

Salutatorian Wai (Winnie) Wong also thanked her teachers, and her friends “for being my friends.”

“Life is a book of many chapters,” she said. “Now we begin a new chapter. Time waits for no one and our future has endless possibilities. Relish this moment.”

Wong has been awarded a scholarship to the University of Alabama in Birmingham where she plans to study marketing and accounting. She is the daughter of Ko Ping and Guang Wong.

Valedictorian Samuel Reece used the image of a road trip, noting that this trip of 13 years was now complete.

“[On this trip] we found mentors and heroes, but this familiarity is about to end,” he said.

“Don’t slow down until we get where we’re going. There’s no going back. So, buckle up, drive straight and hope for the best.”

Reece is the son of Dr. Kristen Gilbert and Dr. Gregory Reece. He earned a scholarship to the University of Alabama where he plans to study political science.