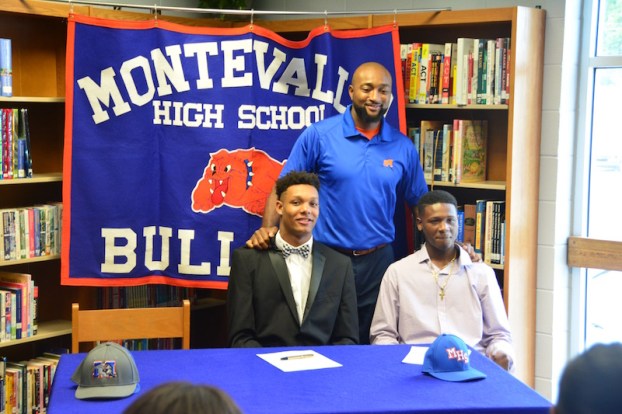 MONTEVALLO – Every signing ceremony is full of joy and thankfulness from the signee, parents, teachers and coaches who can’t help but be overcome with what the day means.

For the signee it’s an opportunity to continue playing a sport they love as well as the fortune of having a scholarship to do so. It cements all of the hard work they have done in their lives to get to such a special day. For the parents, teachers and coaches, it honors what a great job they have done raising that student athlete or serving as a role model throughout their young career.

But for Tavarus Hall and Da’Shaunte Smith, signing on the dotted line was a little bit more of a special moment than most.

On Tuesday, May 23, Hall and Smith sat at a table in the library at Montevallo High School, less than 24 hours after graduating, in front of family, teammates, friends, teachers and coaches as they signed their names to a piece of paper to continue their basketball and academic careers on full-ride scholarships.

Hall signed with Wallace Community College Selma, while Smith decided to make it official by joining Tusculum College in Tusculum, Tennessee. While the moment was a special one as several family members continually praised Jesus for the moment, it was the years and months leading up to the big day that made it that much more special.

“Te has been driving me crazy with this whole process; there’s been about 20 schools he turned down and 30 he told OK and then changed his mind on them as well. Tavarus’ story is just about crazier than Te’s,” Montevallo head basketball coach Greg Dickinson said. “At the end of the day though, both of them made it, they graduated last night and are now signing to go on and continue playing basketball.”

Smith’s story starts as a freshman when he first took to the floor for the Bulldogs in coach Dickinson’s first year at the helm. It wasn’t the start Dickinson hoped for, however, as his students struggled mightily academically. Dickinson recalled getting progress reports before a game against Calera and seeing nothing but F’s next to each player.

Smith was one of those players not taking it seriously and he along with the rest of the varsity players were benched. That moment of embarrassment was felt by Smith and his teammates as they all of a sudden took a strong interest in making the grades and even grabbing spots on the honor roll.

While he had better grades, Smith still had some on-the-court problems and was a handful for Dickinson to deal with, but over the next few years, he grew into a fine young man. At the start of this season, he still had some problems with cockiness and anger, but by the end of the year, he was a completely different player that played with a deep passion for not only his coach, but his teammates next to him.

“It was tough,” Smith said with a deep sigh of relief after signing his letter of intent. “I was a baby at first and now I’m here. It just all happened so fast.” 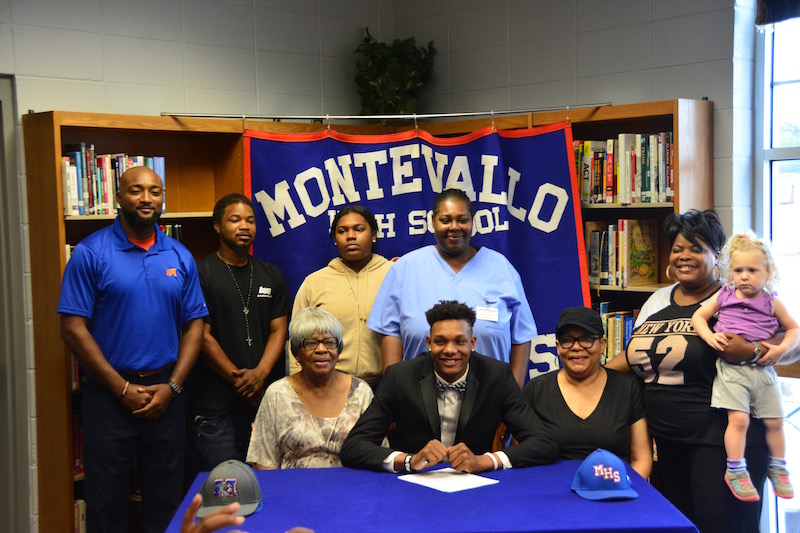 Smith is surrounded by his family and coach D after signing.

There’s one man that can be attributed to that change and it’s his head coach who benched him when he needed it and helped shape him into the star athlete and smart young man he has become.

“(Coach Dickinson) has been shaping me since my freshman year,” Smith said. “I got on his nerves, but fought to get back right with him over the years.

“I’ll never forget the love here, my team and my coaches and family pushing me to this moment.”

Hall’s story, while similar, has characteristics that also make it a very special moment for him. He was also a member of that team four years ago that struggled academically and had to deal with the hardships that came along with it.

“I never thought this day would happen man,” Hall said. “I’ve been through a struggle and my mom, my grandparents, my dad and coach D have been by my side so for them to be here supporting me is a big deal.”

One of the best all-around athletes in Shelby County as both a football and basketball star, Hall was high on several people’s list when it came to recruiting, but some blunders along the way kept some possibilities off the table. 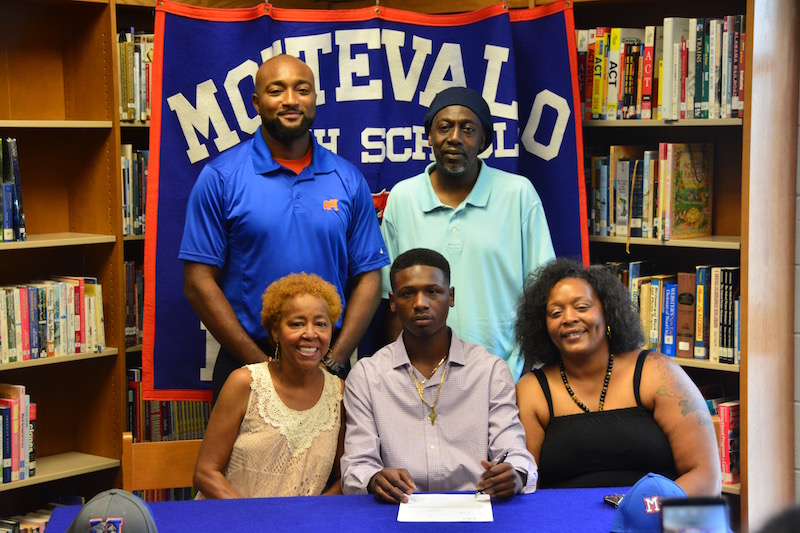 Hall pictured with his family and head coach.

“I wish I could’ve went to a bigger school because I had bigger offers, but I kinda slipped and didn’t take the ACT, which wiped those opportunities off the plate,” Hall said. “I thank God for this blessing though. For Wallace to look at me despite everything I have done in the past is such a blessing.

“I just really never thought I would see this day because of the bad decisions I was making. Coach D helped me use my coping skills to grow out of it and start making better decisions for myself. I just wanted to make it man and now I have.”

While Hall has graduated from Montevallo and made it to the next level of basketball, he knows his work isn’t done yet. He went on to say he plans to work hard both in the classroom and on the court so he can eventually move up from the JUCO team and make his way to a Division I college.

“I’m going to shoot for the stars,” Hall said.

The amazing part of the story, and the emotional part for the family, isn’t how much they have grown over the last four years, but that they realize the mistakes they have made, which shows accountability and the men they have turned into.

By GRAHAM BROOKS / Staff Writer HELENA–After finishing with a 38-6 overall record capped off with a 6A state championship,... read more