For 120 years, the elegant white brick church stood at the corner of Alabama and Shelby streets in Montevallo, its iconic stained glass window guarding its flock and extending an invitation to any lost sheep who happened by.

Sadly, much of the Montevallo Presbyterian Church building is coming down, the victim of high winds and an elderly oak tree on April 3, just two weeks before Easter. That was not the end of irony — that this beautiful landmark should be wounded like this during the season of Lent seemed ironic enough, but that fateful tree found its mark during this little city’s bicentennial celebrations. 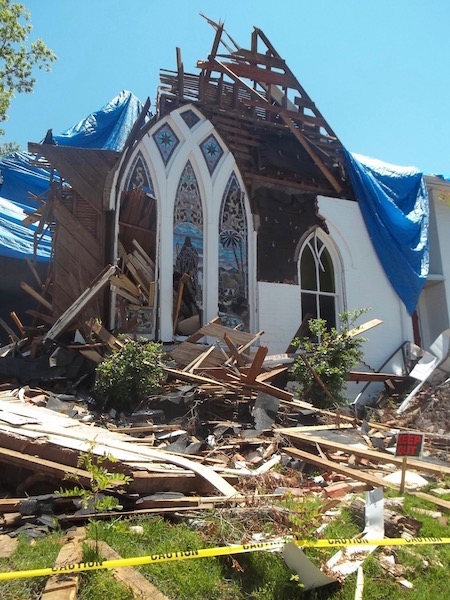 “This is so sad,” said Mayor Hollie Cost. “It would be tragic any time, but it seems even sadder when we are celebrating history in our city and when the church was celebrating a significant birthday.”

Casey Pilgrim, the financial officer and a member of the church’s session (the governing body), said that he and the other members consulted structural engineers, restoration experts and others knowledgeable in the ways of old buildings. Alas, the stress was too much, and the risk to workers’ lives too great, to save even the beautiful stained glass window depicting Jesus the Good Shepherd.

“We are not going to have to demolish the entire church, so we will be rebuilding whatever needs to be rebuilt exactly where we are currently. We are trying to preserve as much of the church as we possibly can,” Pilgrim said. “If we can save some of the pews, some of the floor of the sanctuary, the broken pieces of stained glass—we want to have them made into something else.”

That way, he said, parts of the original sanctuary will live on in the 60-member congregation’s new home.

After the tree’s initial impact, there was hope the window and parts of the facade could be saved, Pilgrim said. However, subsequent settling opened cracks in the white-painted bricks, revealing deep wounds in the old bricks’ inner rusty red. The separations widened even after the tree had been cut up and removed.

The 60-some members of the Montevallo Presbyterian Church are meeting meanwhile in the Forbes House, 820 Vine Street, at 11 a.m. Sundays and mapping out a path forward, Pilgrim said. Since the departure of former Pastor Leanne Pearce Reed, the worship services are being led by an interim pastor, the Rev. Lindsey Wade.

The church has a fund-raising effort originally geared to restoration, Pilgrim said, but now aimed more at preservation of the beloved sanctuary’s relics.

A page on the church’s web site (http://www.montevallopcusa.org/storm-damage/) contains pictures of the storm damage and includes this passage:

“And we are grateful that, while we love our building, we know that our church is far more than a building. Our church is the people, a community grounded in God’s love, called by God to worship, grow and serve together. We trust that the God who has sustained this community for 120 years continues to sustain us now.”

By NANCY WILSTACH / Community Columnist For 120 years, the elegant white brick church stood at the corner of Alabama... read more