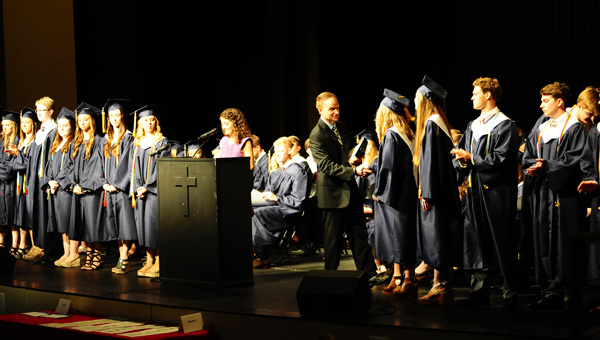 NORTH SHELBY – Briarwood Christian School’s Class of 2017 was recognized at Awards Day on Friday, May 19, for having an average ACT score of 26.8, earning more than $6.5 million college scholarships and much more.

“What you witness before you is truly an exceptional class,” High School Principal Shawn Brower said and noted the graduates’ roles in accomplishments ranging from athletic state championships to community service.

Ninety-nine percent of the graduating seniors will begin college careers, with a few instead beginning mission service.

Brower thanked the graduates’ families for loving and encouraging them along the way.

Annual awards were presented at the event, including the Unsung Hero Award, which went to Steven Giddens.

The Unsung Hero Award was established in honor of Catherine Fusari and is intended to recognize participants in major extracurricular activities that have not yet received due recognition as a major team participant.

Jenna Rose White was presented the Martin Snook Spiritual Leadership Service Award, which was named for the 1978 Briarwood graduate who served as a missionary despite a congenital heart defect, which claimed his life.

The Peggy Pevear “Golden Rule” Award was presented to Blaire Shimer and Katie Green and is based on the character traits exemplified by Pevear, including a smiling countenance, love for others, being a good friend, demonstration of school spirit and support and revealing a knowledge of Jesus Christ to others.

This award is given to a football player who exemplifies the heart and character of Thomas Rivers as chosen by the Briarwood football coaching staff.

The Joseph Honea Memorial Scholarship was presented to Jason Hammond.

The scholarship is awarded in memory and honor of Honea, and is awarded to a senior band member who best embodies Honea’s Christian ideals and example.

The Courageous Fruits of the Spirit Award was presented to ClaraLane Purdy.

The award is given to a senior female student who has spent the majority of her high school years at Briarwood and who exhibits the fruits of the spirit: love, joy, peace, forbearance, kindness, goodness, faithfulness, gentleness and self-control.

Also, the recipient is one who has been able to exhibit these fruits regardless of a particular life setback, disappointment or hurdle; and has been willing to be transparent with her struggles and share with others publicly or privately so that others can learn from her mistakes and situation and be encouraged, inspired or challenged by it.

Leigh Ann Mathews and Connor Curtis received the Social Leadership Award, which is for students who consistently demonstrate social leadership in their grade.

Jenna Hancock and Connor Martin received the Spiritual Leadership Award, which is for students who consistently demonstrate spiritual leadership.

Alex O’Brien and Giddens were recognized with the Sportsmanship Award, which is nominated by coaches and selected by the athletic director based on participation, demonstration of Godly character and reputation.

Thirteen other institutions that had granted scholarships to graduating Briarwood students were also announced though they were unable to have a representative at the ceremony.