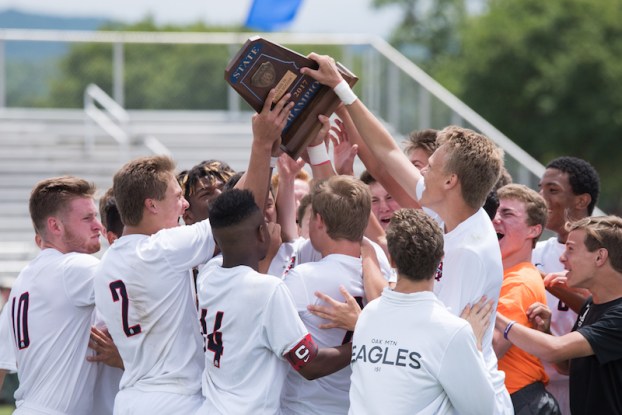 The Oak Mountain Eagles were one of three boys teams to win a state championship and finish the season ranked No. 1, while seven total from the county were inside the top 10. (Reporter photo/Keith McCoy)

There’s really only one word that can describe soccer in Shelby County during the spring of 2017, dominant. With five state champions combined between the boys and girls and seven teams in the final four, it was almost impossible to keep up with all of the success.

Out of the four boys classifications, three teams finished the season as the No. 1 team in their respective class according to eurosportscoreboard.com, which only makes sense considering all three won state championships.

While those three, Oak Mountain (7A), Pelham (6A) and Indian Springs (1A-3A), were ranked No. 1, four other teams also appeared in the final rankings after strong seasons as well.

In 7A, Spain Park and Thompson popped into the final standings. The Jags, coming in at No. 6, made the playoffs, but got the unfortunate pleasure of facing Vestavia in the first round. The Rebels went on to win that game and make it to the Final Four where they eventually lost to Oak Mountain.

Thompson was also ranked as they came in at No. 12 without making the postseason. The Warriors were in one of the most difficult areas with Hoover and Vestavia, and unfortunately they were the odd team out, but still one of the better teams in the state.

Oak Mountain finishing as the No. 1 team in the 7A standings was an easy decision because of the body of work they put in this season. The Eagles picked up their third straight state championship in a PK win over Davidson as Kennedy Davis put home the game-winning penalty kick. It also marked their seventh state championship since 2005.

In 6A, the Pelham Panthers finished as the only ranked county team in the No. 1 position and there is no more deserving team of a No. spot than the Panthers. It’s been a long three-year battle that saw Pelham fall in the Final Four each of the last two years before finally breaking through to win the school’s first ever soccer state championship in a 2-0 win over Cullman. The panthers also reached an impressive 22 wins, while only losing six games and giving up 29 goals in their 29 games.

Briarwood’s boys came in at No. 2 in the 5A standings after a heartbreaking ending to the season as the county came close to a sixth state championship. The Lions fell to Randolph 3-2 in the state championship game after giving up two unanswered goals in the second half after taking a 2-1 lead early in the half.

As was the case all year, Indian Springs and Westminster finished the season in the top 5 of the 1A-3A division, but it was Springs who came out as the No. 1 team after adding another blue map to the collection.

Almost as impressive as their state championship was their 23-2-6 record. Managing to get through 31 games with just two losses is something head coach Rik Tozzi deserves a whole lot of credit for.

After a 10-0 mercy-rule win in the first round of the playoffs, Westminster found themselves on the losing end of a 1-0 second round game against Bayside to prevent a rematch against Springs in the Final Four. The Knights spent much of the season as the top ranked team in the classification and ended the season with an overall recorded of 19-5-3.

Congrats to the three state champions as well as all seven of these teams that made soccer in this county so strong in 2017. It will be a hard season to top, but soccer has transcended in the county and 2018 is sure to bring even more excitement to the pitch.

By ALEC ETHEREDGE | Sports Editor CULLMAN – In its six years as a school, the Westminster School at Oak Mountain’s... read more