Vincent man charged with attempted murder in May 22 shooting

COLUMBIANA – A 29-year-old Vincent man is being held in the Shelby County Jail without bond after he was charged with allegedly shooting a handgun into an occupied vehicle in late May. 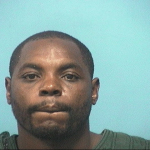 The Vincent Police Department arrested Cordero Ranard Chapman, who lists an address on Fleming Road in Vincent, on May 22 on felony counts of attempted murder and discharging a firearm into an occupied vehicle.

According to his arrest warrants, Chapman allegedly discharged a handgun into a vehicle occupied by the victim on May 22 “with the intent to commit the crime of murder.” Both of his current charges stemmed from the same incident.

When he was arrested, Chapman was out of jail on bond for a 2014 charge of shooting into an occupied vehicle involving a separate victim.

Because he was on bond when he was charged with the two most recent crimes, his bond for the original charge was revoked.

Chapman is now set to appear in Shelby County District Court on July 20 for a preliminary hearing.

VINCENT –Balloons that read “congrats” floated beside every Vincent Middle High School graduate as he or she walked across the... read more