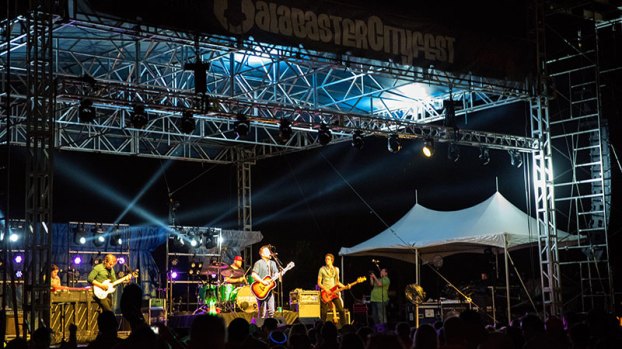 The 15th annual Alabaster CityFest will be on Saturday, June 3 at Alabaster’s Municipal Park between Thompson High School and Thompson Middle School. (File)

ALABASTER – Shelby County’s largest outdoor music festival will return to Alabaster’s Municipal Park on Saturday, June 3 for its 15th consecutive year, bringing with it a slew of musical acts, vendors and family activities.

The event beings at 9 a.m. at the park, which is between Thompson High School and Thompson Middle School on Warrior Drive.

The day will kick off with a cruise-in car show sponsored by Ernest McCarty Ford behind Thompson Middle School from 9 a.m.-2 p.m. The vendor area next to TMS will be open from 9 a.m.-6 p.m. or later, and will feature dozens of vendors selling everything from handmade products to a wide range of food.

The KidsFest area also will open at 9 am., and will feature family and kid-friendly activities, music from DJ Fuzzy and performances from The Flying K-9s Dog Show at 10:30 a.m. and noon.

On the day stage near the TMS gym entrance, Divine Destiny will take the stage at 10 a.m., followed by Sanchez Tanniehill at 10:30 a.m., Terry Padgett as Elvis at 11 a.m. and Love Dos at noon.

At 7 p.m., Black Jacket Symphony will take the stage with Marc Martel to perform Queen’s album “A Night at the Opera” in its entirety before musical headliners Maddie and Tae take the stage at 9 p.m.

Since its inception in the early 2000s, CityFest has grown exponentially, going from only a few thousand people in its first year to tens of thousands of attendees today.

COLUMBIANA -The 2017 Shelby County Senior Picnic was held on Wednesday, May 24 at the Shelby County Exhibition Center. County... read more