By LAUREN DOWDLE / For the Reporter

It doesn’t take long for people to notice there’s something special about Armeen Barghi.

The son of Taleb and Zahra, Armeen Barghi is a senior at Oak Mountain High School — but his accomplishments in both science and philanthropy are well beyond his years. 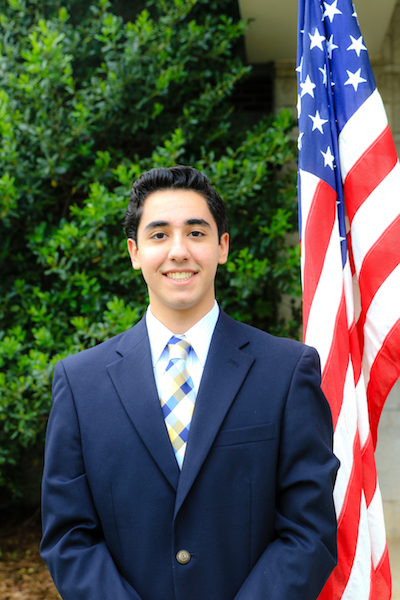 “While his cognitive IQ is incredible, I believe his social intelligence is what separates him from peers of the same cognitive ability,” says Bobby Deavers, school counselor at Oak Mountain High School. “He has an amazing aptness to connect with people and influence them positively.”

Something else he connects with is science. He’s been a research assistant in two separate laboratories at the University of Alabama at Birmingham, where he’s contributed in both clinical research and complex bench science — and made an impression.

“I have tremendous experience in mentoring and teaching both graduate and professional students and can say with confidence Armeen is going to set the world on fire in any area of academic pursuit he chooses,” says Dr. Lori McMahon, Ph. D., dean of UAB’s graduate school.

Barghi has had the opportunity to shadow a variety of physicians throughout his high school career and says those experiences have only deepened his desire to become a physician scientist.

But he doesn’t keep all of that knowledge to himself: Barghi also supports those around him at school, in the community and even across the world — like how he helped raise money for a mobile health clinic in the Middle East.

“Empowering one’s community — whether it is regional, state, national or even international — reflects one’s own success,” he says. “Giving back to the community is a form of helping those that helped me grow and thrive.”

When he isn’t in the lab or classroom, Barghi likes to spend his time playing table tennis, biking, fishing, kayaking or canoeing with his friends and family.

With admissions to seven Ivy League schools, he decided to attend Harvard to pursue a major in biological sciences, and he plans to pursue medicine after college to continue his research and philanthropy.

“Personally, I believe that giving back to the community is fundamental in promoting altruism and humanitarianism. Professionally, medicine is the ultimate arbiter of human healthcare,” he says. “I am interested in both continuing research and pursuing medicine as a way to advocate and further promote healthy living.”

Allen thinks critically to assist others

By CONNIE NOLEN / For the Reporter Representing Hope Christian School as one of The Shelby County Reporter’s 2017 Nine Who Shine... read more