By LAURA BROOKHART / For the Reporter

This video also initiated conversations for other video projects and promotions resulting in Dollentas forming his own company, Meraki Visual Media (more at Facebook.com/MerakiVM/). 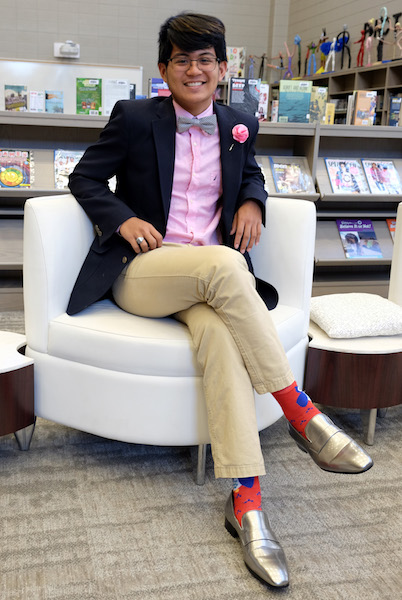 Helena High School senior Nigel Dollentas is known for his skills with technology. He will attend Troy University in the fall and plans to major in accounting with a minor in Spanish or photography. (For the Reporter/Laura Brookhart)

Dollentas posts on his YouTube Channel called ‘One Traveler, One World.’ A recent post was filmed at a day trip attended by HHS students at American Village. And he also writes for Bitcoin.

Dollentas was born in the Philippines, has lived in Helena since age 8. The Dollentas family, father Nhorman and mother Gennie, arrived in the U.S. from the Philippines in 2002 when his father took a position with a U.S.-based telecommunications company. Gianna, his sister, was born in Florida, the family’s first U.S. home.

“I enjoy Helena as it combines a small-town feel with the quaint and charming Old Town area and Buck Creek, but basic services, groceries, doctors, salons, etc. are all available nearby, so it’s the best of both worlds,” he said.

At HHS, Dollentas participated in the Debate Team and History Club and, as he describes it, “too many honor societies to list.”

Dollentas enjoyed attending football and basketball games and, this year, the Senior Prom. Another highlight was being voted Class of 2017 Best Dressed.

“School spirit was at an all-time high the week before the prom,” he recalls. “Everyone looked forward to coming to school with dress-up days each day, and there was a sense of friendly rivalry between the grades as well as a cohesive sense of unity.”

“The class of 2017 was definitely a spoiled class,” Dollentas notes, “Getting a new middle school as well as new high school right when we needed them.”

At HHS, Dollentas credits art teacher Maggie Blankenship as a mentor for motivating and encouraging his photographic pursuits. His photographic skills are self-taught.

Also, English teacher Spring McKinney and social studies teacher Anita Lewis (and her amazing sense of humor) have been influential and supportive.

Dollentas will attend Troy University, planning to major in accounting and minor in either Spanish or photography.

“After college, I plan to work the traditional corporate ladder, or perhaps not, as I’ve got quite the entrepreneurial spirit and tend not to follow the ‘safe’ path,” he said. “My goal is to retire by 40 by saving more than I spend and investing the difference in the stock market, then to travel the world full time.”

By GRAHAM BROOKS / Staff Writer HELENA–Authorities are on the scene in the area of Shelby County 52 at Cahaba... read more