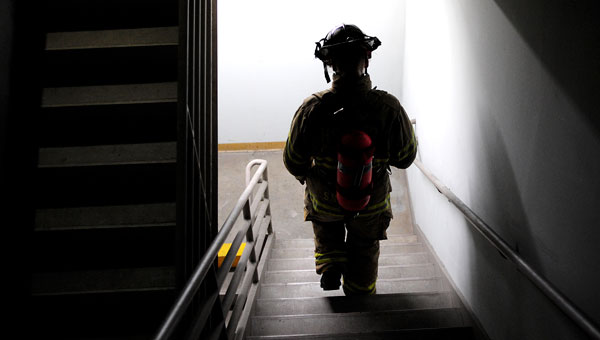 A firefighter with the Hoover Fire Department walks into a pool of light in a Wynfrey Hotel stairwell during training at the hotel. (FILE)

HOOVER – The city of Hoover got good news recently when the Insurance Services Office, based in New Jersey, awarded the city Class 1 Public Protection Classification in fire protection.

“We’re happy and proud of this rating,” Executive and Public Information Officer Rusty Lowe said. “We’re here to serve the citizens of Hoover, and they should know that this achievement by a national board means we’re doing the best we can.”

Lowe said the last inspection visit was about three years ago.

“We were Class 2, and a strong 2, and that was part of our frustration,” he said. “We knew we were so close to the higher rating.”

The Hoover Fire Department shares the Class 1 rating with only 12 other fire agencies in Alabama, and is among 179 departments rated Class 1 among the nation’s 48,000 fire departments.

Lowe explained that the most recent process was different from the one three years ago.

“We have a new system now,” he said. “We do our paperwork and go through some of the process ahead of time, so the actual site visit goes more quickly. The inspectors already have in mind where we are and what they need to check when they arrive, and they did this in a single day.”

Lowe said the inspection is based on four categories.

First, the fire department itself, including personnel and training.

“We call this the ‘fire flow,’” Lowe said. “We’re fortunate to have good water sources in our area, and this makes a significant difference.”

Third, the 911 system and the department’s internal communication system.

Lowe said the improved rating will make a difference for commercial property owners and neighborhood homeowners.

“Bear in mind that the new rating will take effect Aug. 1,” Lowe said. “Homeowners should call their insurance carrier and let them know about the new classification. Residents should notice improvement in their rates.”

Lowe said the Hoover Fire Department doesn’t plan to rest on this achievement.

“The ISO will be back at some point to be sure we continue to improve, so we can’t relax,” he said. “We’ll stay on top of every category and maintain Class 1 or better. Our citizens trust their fire safety to us, and we don’t plan to let them down.”

Lowe has been in his current position for five years. He previously served as a firefighter and paramedic and has been with the department for 29 years.

Since 2010, the city of Chelsea’s population has increased by almost 21.2 percent. According to the U.S. Census Bureau’s population... read more