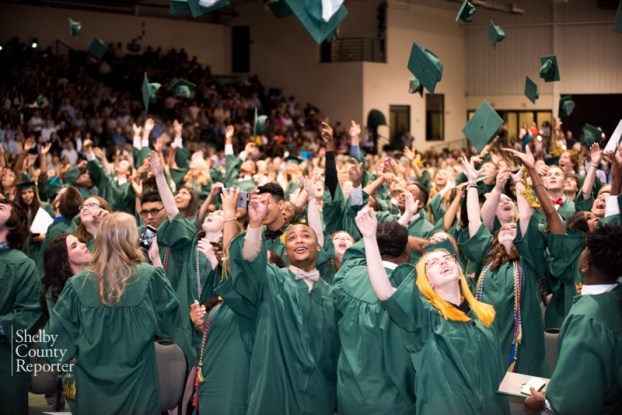 More than 200 students graduated from Pelham High School on Thursday, May 25, at the Pelham Civic Complex. (Reporter photo/Keith McCoy)

PHS celebrates the graduating class of 2017

PELHAM – After the playing of the national anthem, Pelham High School’s graduating class of 2017 locked arms and swayed side to side in unison as they sang the school’s alma mater with pride.

More than 200 students graduated from Pelham High School on Thursday, May 25, during the school’s commencement ceremony held at the Pelham Civic Complex.

The togetherness that valedictorian Kelsey Schoenmeyer spoke of in her address to her classmates was on full display throughout the graduation.

It showed when PHS teachers lined the walkway to hug and congratulate the graduates as they made their way to the stage, when class president Jeremiah Spillers stood on stage and took a selfie with all 200-plus of his classmates and at the end of the ceremony when a student stood in a chair and led the senior class in a chant that was followed by the iconic tossing of graduation caps.

“I didn’t realize when I walked though those doors in 2013 how much I would grow to love our class,” Schoenmeyer said. “We’ve been there for each other in laughter and in tears.”

Schoenmeyer, who graduated with a 4.43 GPA, encouraged her classmates to be intentional in all that they do and to use their passions and talents to make a positive impact on the world.

“From beating Helena in football, to getting out of school to go watch the basketball team play and witnessing the soccer team win state – this year has been unforgettable,” Spillers said. “But like every good thing, it has to come to an end.”

PHS principal Amanda Wilbanks reminded students that their lives have purpose and encouraged them to find their own way instead of following the crowd.

“And always be on the lookout for a new friend, and if you make a wrong turn, circle back,” she said. “But before you run out into the world, remember there’s only one you in this great big world and there’s a plan for your life. We’ve always believed in you, now make us proud.”

“Things that are overwhelming to you cannot be properly managed until it is no longer overwhelming,” he said. “Well how do you make something that’s overwhelming not be overwhelming? You do that by dividing it into pieces that you can manage and you just take it day by day. And when you need someone to lift you up, forget about the texting, forget about the emails – pick up the phone and hear a voice that loves you and wants you to do well.”

The PHS Class of 2017 was offered $6.9 million in scholarships and four students are leaving high school and going directly into the U.S. military.

Allen thinks critically to assist others

By CONNIE NOLEN / For the Reporter Representing Hope Christian School as one of The Shelby County Reporter’s 2017 Nine Who Shine... read more