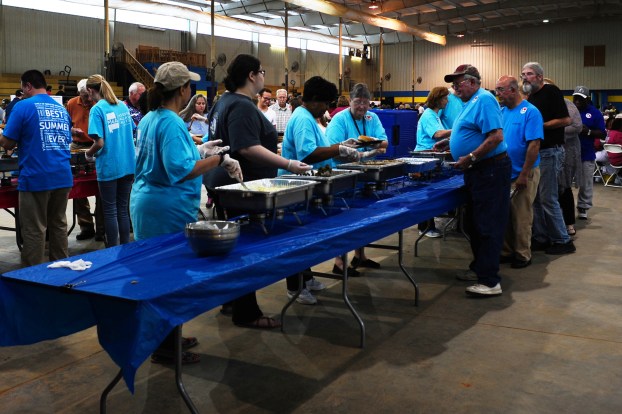 About 700 seniors gathered at the Shelby County Exhibition Center in Columbiana for the 14th annual Senior Picnic on May 24. (Reporter photo/Amalia Kortright)

“The Shelby County Commission has been significantly investing in senior programs in our county for 20 years,” Dudchock said.

Dudchock said the picnic served as a way for senior adults to rekindle old friendships, make new friends and increase their community involvement.

“It has communities joining other communities. It gets them out for a day of entertainment, food and door prizes,” Dudchock said. “It’s just exciting for us.”

“The dance instructor reached out for her desire to grow (the program) and have people from Columbiana, Alabaster and Pelham on her dance team from their three different senior centers. Those ladies are fearless,” Dudchock said.

According to Dudchock, the Shelby County Senior Picnic has grown with the county’s senior adult population over the years.

“If you look at the growth of our 55 and older population, it’s reached a high percentage,” Dudchock said.

While the picnic had to be relocated, Dudchock said the inconvenience did not stop about 700 local seniors from attending.

“We were going to be at the American Village (in Montevallo), and we were already set up there. There was bad weather forecasted, and there were significant inches of water recorded onsite,” Dudchock said. “We originally had 1,080 RSVP. Today, we’re around the 700 number.”