Imagine stepping foot into a new school with unfamiliar classrooms and faces surrounding you.
Ethan Smith took on this challenge when he enrolled at Coosa Valley Academy.

Smith had been homeschooled throughout middle and the early years of high school, but wanted a traditional school experience for senior year. 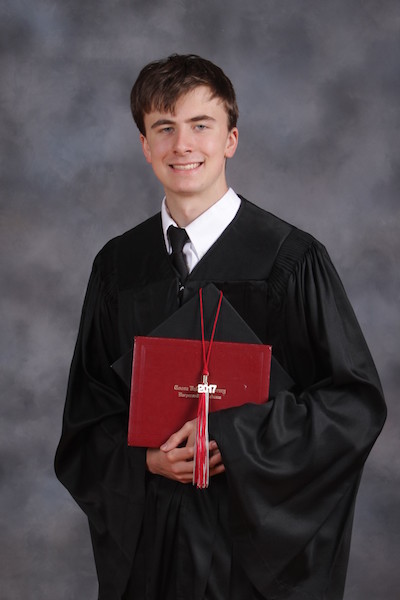 Coosa Valley Academy student Ethan Smith was homeschooled before enrolling at CVA for his senior year. Smith will head to the Coast Guard in September. (Contributed)

“It’s been fantastic – it’s given me opportunities that I didn’t have before now. For example, I got to go to prom this year,” Smith said. “I have to admit I was a little bit worried when I came back to school because I hadn’t been around people my own age regularly for easily almost a decade. The teachers and students have been very welcoming though.”

Teacher Janet Smith said Ethan didn’t have to aim for a higher diploma, but he did.

This required him to take an extra semester of foreign language, which wasn’t his strongest subject. Ethan also had to take a pre-calculus class that required countless hours of additional studying.

“While many students face challenges and give up or just get by, that is not this young man’s style,” Janet said. “Ethan studied diligently to play ‘catch up,’ often coming early or staying late to get extra help with concepts he didn’t remember or understand.”

She said this semester Ethan is excelling in subjects that were challenging for him.

“Mrs. Smith’s really helped me expand my writing skills too,” Ethan said. “I know this year has better prepared me for future things such as writing college papers and applying for a job down the road.”

Ethan’s future plans involve heading into the Coast Guard in September. He said his goal is to get college paid for while having the opportunity to serve his country at the same time.

“If all students were like Ethan, we would have a nation of globally competitive students,” Janet said.

By NANCY WILSTACH / For the Reporter Camryn Neal, a tall willowy blonde with a shy smile, takes her soccer seriously—so seriously... read more