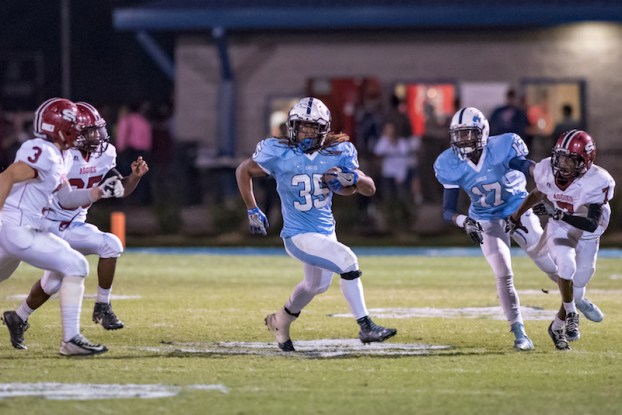 Calera’s football team will look to improve on their 8-4 overall record and second-round playoff exit in 2016 during the upcoming football season. (File)

CALERA – Summer just sprung up on us as the 2016-17 academic and athletic year came to an end, but just around the corner is the fall of 2017, bringing with it the return of high school football.

Soon we will be working on our football magazine previewing each team’s season as they prepare for Friday night’s under the lights. For now, we will start the countdown by looking at each team’s schedule for the upcoming season and that trek will start with none other than the Calera Eagles.

The 2016 season featured an 8-4 overall record and an appearance in the second round of the playoffs where they lost to Carroll High School. That 8-4 record featured a strong second place finish in Class 5A Area 3 with a record of 5-1, which they would be more than happy to duplicate in 2017.

Just like last season, the Eagles will kick their season off with an out-of-area game against Mae Jemison, but this time will be the home team. Calera pulled off a rather easy 25-6 win last year to get off to a strong momentous start and will look to do the same this year on Aug. 25 against the Jaguars.

They will follow that up with their first road game of the season at Bibb County, a game that featured 83 combined points last season. While Calera came out on top 49-34, they will definitely want a lower scoring affair this go around on Sept. 1.

This year, they will play these two teams in succeeding weeks yet again as they take on Dallas County at home on Sept. 8 and Central on the road Sept. 15.

Calera’s first of two consecutive losses last year came to eventual area champion Demopolis, who finished the season a perfect 6-0 in region play. The Eagles lost that game 38-13 at home and this year have to travel to Demopolis on Sept. 22.

Last year they followed that loss up with another tough 38-14 loss to Jackson-Olin and will have to travel to take them on for their third consecutive road game on Sept. 29.

The Eagles will get a bye week on Oct. 6 before returning to the field on Oct. 13 at Jemison for their fourth consecutive road game. Last season, the Eagles were able to handle the Panthers 41-27 coming off the idle week.

Some breathing will be allowed following that game as Calera will return to the comfort of their home crowd for the final three weeks of the season when they will host Sumter Central, Marbury and Sylacauga. Last season they beat Sumter Central and Marbury with relative ease before falling to Sylacauga 42-28 to end the regular season.

The Eagles did however beat Sylacauga the following week, 35-34, in the first round of the playoffs.

An outlook of their entire schedule is below:

ALABASTER- The Angel Warriors Foundation is hosting a soccer camp and a volleyball camp during the month of June for... read more