COLUMBIANA – A 28-year-old Shelby man is being held in the Shelby County Jail on bonds totaling more than half a million dollars after he was arrested and charged with production of child pornography, first-degree sodomy and bestiality. 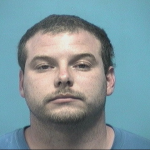 The Shelby County Sheriff’s Office arrested Daniel Ray Dunn, who lists an address on Shelby County 406 in Shelby, on May 26 and charged him with the felony child pornography and sodomy charges and the misdemeanor bestiality charge. He currently is being held in the Shelby County Jail on bonds totaling $506,000, according to jail records.

Production of child pornography and first-degree sodomy are Class A felonies, and are punishable by up to life in prison upon conviction. Bestiality is a Class A misdemeanor.

According to his warrants, Dunn’s charges stemmed from incidents in May, during which he allegedly produced obscene matter of a juvenile and allegedly did “engage in deviate sexual intercourse” with a child younger than 12.

His bestiality charge stemmed from a May incident during which he allegedly “engaged in or submitted to any sexual contact” with a female dog.

Shelby County Sheriff’s Office deputy Debbie Sumrall said the office was able to release few details about the case, because it involves an underage victim, but said the case was still being actively investigated by the department.

Dunn is set to appear in Shelby County District Court for a preliminary hearing on June 29 at 8:30 a.m.