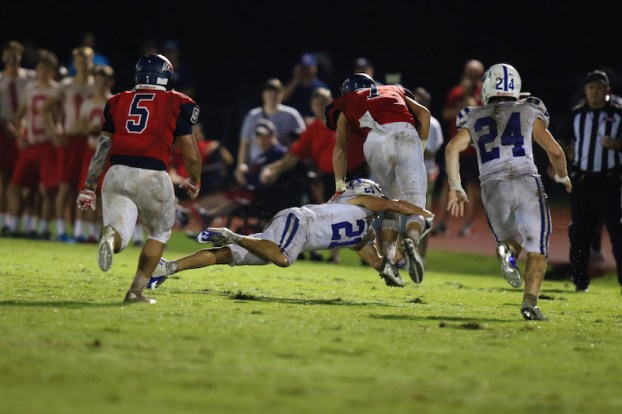 Oak Mountain will look to improve on a 3-8 record from 2016 as they play one of the toughest schedules in the toughest 7A region in 2017. (File)

This year’s schedule will look a lot like last year’s as they square off against the same teams, but will switch home and aways from a season ago.

Last year during those first three losses, two of the three games were on the road as they fell to Hillcrest-Tuscaloosa and Huffman in games two and three, respectively. The loss to Hillcrest was a 41-21 shellacking, while the loss at Huffman was a little more manageable as they fell 21-11.

In 2017, Oak Mountain will start the season with those three teams yet again, this time around with two of the three at home. They’ll open the season at Chelsea on Aug. 25, but with all of the Hornets losses offensively, that game should be a lot more closely contested this go around.

They’ll follow that up with back-to-back home games against Hillcrest and Huffman on Sept. 1 and 8, respectively.

After that three-game losing streak to open the season a year ago, the Eagles responded by winning three of their next four games against Vestavia, Thompson and Tuscaloosa County, with their only loss in that time period coming to eventual state champion Hoover.

In all three of those wins, they scored 30 or more points as the offense had finally found some rhythm. They took down the Rebeles 34-7, the Warriors 30-28 and the Wildcats 38-18.

This year that four game stretch will start on Sept. 15 at Vestavia Hills and will be followed by a home matchup with Thompson. A much needed bye week will follow before a big matchup at defending 7A champion Hoover on Oct. 6.

That will be followed by a game with Tuscaloosa County at home. Those first seven games will undoubtedly be a tough test for the Eagles and it won’t get any easier over the final three weeks of the regular season with games at Mountain Brook and Spain Park and a home matchup with Hazel Green to end the season.

Two of the three losses were by three points or less, to Spain Park and Hazel Green, but all three will be improved this season.

There is no doubt competing in Class 7A Region 3 will make life tough for Oak Mountain as Hoover, Thompson, Spain Park and Mountain Brook will be among the best teams in the state and others such as Vestavia will be improved. That being said they got into the playoffs with just three wins last season and can pose a threat again this year.

The Eagles’ full 2017 schedule is below: