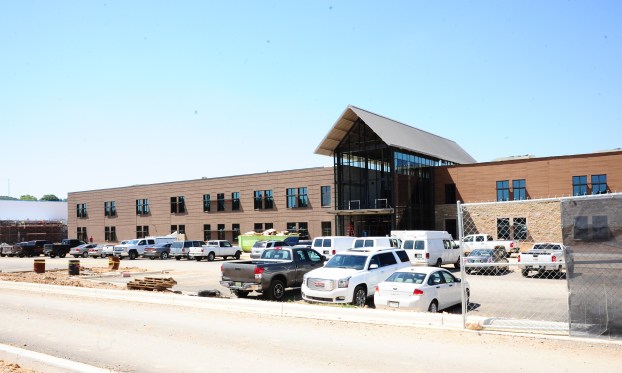 The grand opening for Pelham Park Middle School, pictured here in May, will be Aug. 6 from 2-4 p.m. (Reporter photo/Briana Harris)

PELHAM – The Pelham City Council accepted a $1.07 million bid from Wiregrass Construction Company Inc. during a meeting on Tuesday, May 30, for roadway and drainage improvements along Court Way and turn lane improvements on U.S. 31 at Pelham Park Boulevard.

Both of these road projects will provide roadway access to Pelham Park Middle School.

Goodwyn, Mills and Cawood project manager Keith Strickland said three companies placed bids for the project, with the bids from the two lowest bidders coming within 2 percent of each other.

Strickland said he asked the council to hold the special meeting so the project can begin as soon as possible.

“We can have a good bit of this project completed by the time school starts, but it’s important to get started on it right away,” he said.

Work on Court Way will likely be ongoing as the 2017-2018 school year starts. Court Way is an undersized road that falls off into a ditch and lacks curb and gutter. Work on the road will include widening and repaving and adding curb and gutter.

Court Way will link to a connector public street that is being reopened. The connector road joins Court Way to Village Place.

On U.S. 31, left and right turn lanes will be added to help with traffic to and from the school.

In early April, the city accepted a $113,473 bid from Stone and Sons Electrical Contractors for the installation of traffic signals at the U.S. 31 and Pelham Park Boulevard intersection.

The city’s goal is to have the turn lanes complete and the traffic signals up and running by the time the Pelham Park Middle School opens to students in the fall.

In other business, the council also discussed the hiring of a city manager. The council recently held first round interviews for the position and plans to narrow the candidate pool down to two to three people to bring back for a final round of interviews.

For the final round of interviews, the council agreed that it would be a good idea to reach out to city department heads to see what questions they’d like for the council to ask the candidates.

The council agreed at the May 30 meeting that they would be prepared to pick interview finalists at the next council meeting on June 5.

Pump It Up of Pelham moves to new location

PELHAM – Pump It Up of Pelham is hosting a free grand opening event from 2-7 p.m. on Friday, June... read more