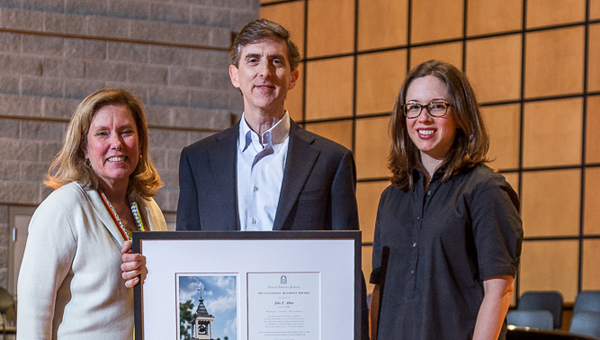 More than 300 students, faculty and fellow alumni joined members of the Board of Governors on Friday, May 5, for a special Town Meeting honoring Abbot and recognizing outgoing and incoming trustees following the Annual General Meeting of the Board.

Abbot rolled off the Board after having served two consecutive seven-year terms.

“I can’t tell you what an honor it is for me to be here and how grateful and humbled I am to be standing here,” Abbot said. “Indian Springs certainly is a special place, and I’ve always said whatever academic and professional success I’ve enjoyed, a lot of credit goes to Indian Springs and the intellectual and academic foundation that the school and so many great teachers—some of whom are still here today—provided to me. I’m happy that I’ve been able to give back in some way to a place that has meant so much to me.”

After graduating from Indian Springs, Abbot received a bachelor’s degree in systems engineering from the U.S. Naval Academy, an ME in industrial engineering from The Pennsylvania State University, and an MBA from Harvard Business School.

He served as a surface warfare officer in the U.S. Navy and began his career in the private sector at Goldman, Sachs & Co. in 1992. In 1995, he became managing director of the Global Media and Communications Group of Morgan Stanley’s Investment Banking Division.

In July 2016, he became Executive Vice President and CFO of Cumulus Media, the second largest owner and operator of AM and FM radio stations in the United States.

As chairman of the Board’s Finance Committee, Abbot has worked on two capital campaigns—including the recent Campaign for Springs Eternal—and has sought to make Indian Springs financially sustainable for future generations by growing and protecting the school’s endowment.

“The impact he had on this endeavor was not just in the financial acumen he brought to bear on the task but also in what his fellow Board members have described as his humanity,” said Alumni Council member and Outstanding Alum Award Committee Co-Chair Callen Bair Thistle, who presented the award to Abbot.

“John attributes his impressive academic and professional successes to Springs’ academic rigor and culture of learning, challenging conventional wisdom and being exposed to different perspectives. But it’s also fair to say that John’s accomplishments reflect the core values of the school, reinforcing their value and authenticity for the rest of the Springs community.”

Abbot said that Indian Springs’ values make it one of the finest schools in the nation.

“I’ve been around people who attended the top private schools in the country. Our own kids went to great schools in New York City, and I can tell you that none of those schools has anything on Springs. The level of academic excellence, intellectual discourse, at Indian Springs is as high as or higher than that at any of those schools. Probably most importantly, though, especially in these crazy times, Springs is a safe place to learn. It’s a place where it’s not only safe to have different ideas and different perspectives, but where it’s actually encouraged to debate tough topics, see things in a different light, and challenge the status quo.”

He encouraged current students to treasure their time at Springs and to get involved.

“It’s certainly a different world today than when I was a student. Everything moves so much faster. It’s more competitive. So if I had any advice, I would encourage you to slow down enough to savor your experiences here and get the most out of them. One of the most important tenants in the Indian Springs mission is participatory and responsible citizenship. In that spirit I would encourage you to lean forward and engage in the community and in the world. And of course the more you put into it, the more you’ll get out of it.”

By EMILY REED / For the Reporter While sports was a major focus for Tyler Couch during his time at Thompson... read more