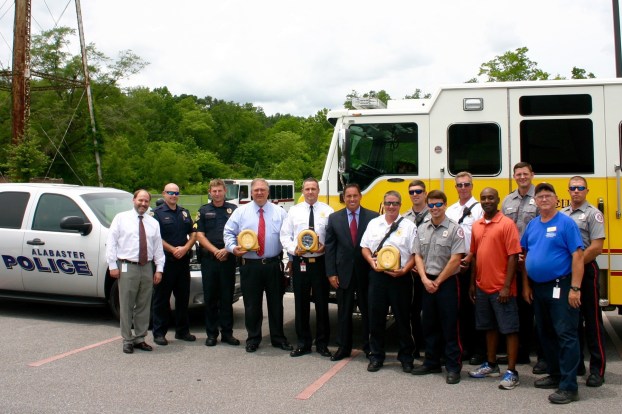 The city of Alabaster will place 20 AED devices in police cars, city buildings, parks and recreational facilities through the Pad program, which was launched on June 1. (Contributed)

ALABASTER- The city of Alabaster officially launched its Public Access Defibrillation program on Thursday, June 1. Through the program, the city will install defibrillation units in police cars, city buildings, parks and recreational facilities.

The Alabaster City Council approved a bid from Cardiac Solutions to purchase and install 20 AED devices at a regularly scheduled council meeting on April 10. According to CEO Jon Seale, Alabaster is the first city in Shelby County that has implemented a citywide AED program through Cardiac Solutions.

According to fire chief Jim Golden, the PAD program will increase the likelihood that Alabaster residents and visitors will receive help more quickly in the case of a cardiac emergency.

“Part of the city’s mission is to have a higher quality of life for our citizens. This is just another aspect in pursuit of that,” Golden said. “This is going to dramatically impact the community. Having the AED devices strategically placed around the community in high-traffic areas will ensure the highest chance of survival for members of our community.”

Each AED features a voice guide that will talk the user through the CPR process, and will utilize software that will allow city officials to check on the whereabouts of each device.

“What we want to do is protect our citizens and children. I hope we never have to use them, but we’re prepared now if we do,” Seale said.

Seale said Cardiac Solutions will also regularly maintain all of the devices in order to keep them in working condition.

“We design, implement and maintain the program,” Seale said. “We don’t just sell an AED, we build a compliance program around all of them.”

“Not only do we (Alabaster) have them, but we will also have the peace of mind that when we need them, they will do what they need to do,” Golden said.

Cardiac Solutions consultant Jennifer Crook said the program will help dispel the common misconception that those in cardiac arrest only need CPR.

“When someone is in cardiac arrest, CRP alone is not enough. Cardiac arrest is different from a heart attack. That’s a plumbing issue, while this is an electrical issue,” Crook said.

Seale said he has seen the Public Access Defibrillation program save lives in cities where it has been implemented.

“Last year alone, there are 11 documented lives that have been saved through the PAD program,” Seale said. “We’ve already saved seven this year.”