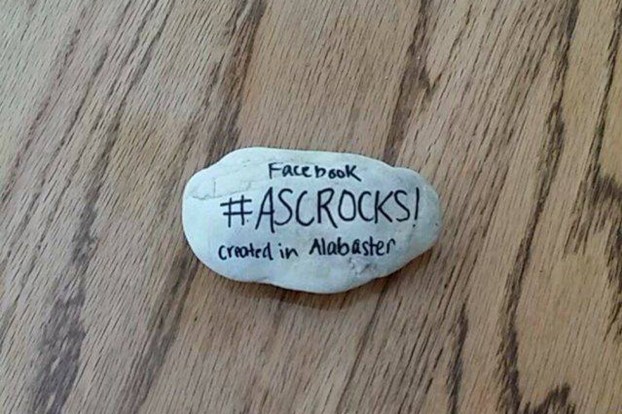 ALABASTER- Alabaster residents Kathy Jackson and Angel Garner recently started the Alabaster and Surrounding Communities Rock Kindness Project. For the project, Garner said participants paint positive or inspiring messages on rocks and leave them at various locations in the Alabaster area for other people to find.

“It doesn’t take much time, and it doesn’t cost much money,” Jackson said. “We just want to share a smile, and this is a simple way to do that.”

Garner and Jackson created the Facebook group, “ASC Rocks! (Alabaster and Surrounding Communities, Alabama)” in order for participants to post where they left or found a rock. Garner said some people can make a game out of it and move the rocks to different locations or leave clues to where they put their own rocks.

“People can either re-hide them for someone else to find, or they can keep them and take them home for inspiration,” Garner said.

Jackson also reminded participants to make sure to write, “#ASCRocks” on the underside of each rock before they’re hidden.

Garner said she was inspired to start the project after paying a visit to her mother, who lives in Franklin County.

“I’ve been meaning to do this for a few weeks. I heard about it from my mother. I knew Alabaster didn’t have something like this yet, so I thought it would bring some smiles to the area,” Garner said.

Jackson said she originally got the idea from social media and the desire to bring positivity to the community.

“I saw something shared on Facebook about an elementary school doing something similar. As soon as I saw the link, I thought, ‘what a neat idea!’” Jackson said. “This is where I live. A lot of people come to visit Alabaster from Pelham and Helena, and I’ve got friends from all over Shelby County.”

Both women met through the Facebook group, “Alabaster Citizens Community Board,” when they expressed a shared interest for the project.

Both Garner and Jackson stressed that the project is for locals of all ages.

“I hope everybody from all age groups will join in. It’s not just for the youth,” Garner said.

“This is a great idea for children of all ages, whether you’re a toddler or 100 years old,” Jackson said.

Ground rules and suggestions are available on the project’s Facebook page.

By NEAL WAGNER / Managing Editor COLUMBIANA – A judge has again denied a bond reduction request from an... read more