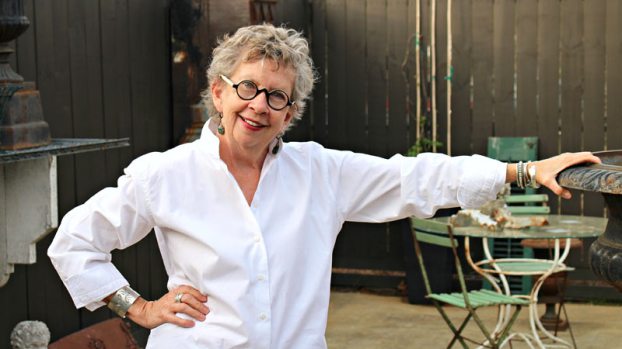 Barbara Adkins is the owner and curator of Black Sheep Antiques in Harpersville.

A chat with a ‘Ewenique’ Black Sheep

Story and photographs by Rene’ Day

When you meet Barbara Adkins, you know from the initial twinkle in the eyes behind her signature chic spectacles that this is someone with her own “ewenique” story. A recent chat with the owner and curator of Black Sheep Antiques in Harpersville did not disappoint – Barbara is a true Shelby County treasure! Her lovely business was highlighted in the November 2015 edition of Shelby Living. (You can access it online and it is worth a look.) This time, meet the dynamo behind the brand.

Someone once said “good” girls rarely make history. It takes those willing to march to a different tune, to embrace individualism and to go beyond bland. Barbara is one of those women. When asked why she chose the “black” sheep for her store (by the way, that sheep is named Ewenice!) she quickly replies, “The term historically refers to something unique, different, not plain vanilla – and perhaps, just a little bit naughty.” She could have been just as easily referring to herself.

Barbara grew up moving around Alabama and Mississippi as the daughter of a Methodist minister. Hers was a “city life” except time during summer vacations and “AEA” weeks when she visited her great-aunt and uncle. Her relatives were the fourth generation of her mother’s family to inhabit Harpersville’s historic Chancellor House. Virtually unchanged in 100 years at the time, she played among items that inspired a love of things that related her family’s history. Opportunities to visit in upscale and sophisticated congregants’ homes exposed her to “wonderful things,” she says, and she benefited from attending public schools with good art programs. These experiences began a journey culminating in an art degree with a senior project in sculpture. She forged a 30-year career in residential and commercial interior design until a trip to Paris four years ago changed her life and her path. She returned and six months later bought the building now housing Black Sheep Antiques. Realizing that life is short, Barbara chose to work in a new art form. The shop is now the palette on which she practices her honed aesthetic and three- dimensional art.

Upon her great-aunt’s death, Barbara chose to become the fifth generation living in the family home and she moved to Shelby County. She says it was not a decision born of nostalgia, but of a responsibility to her family, the land and the community. She undertook a massive restoration and now enjoys her life there with her beloved husband, Sonny. The product of their labor is a residence and grounds appearing in numerous magazine articles and design books. Her former work in design combined with her unique talent is evident at every turn. Barbara’s eclectic mix of good design elements from a variety of periods and genres produces admirers from around the South. Her leadership in major societies such as the Alabama Trust for Historic Preservation has made her a “go-to” person in restoration and antique circles. She understands that in today’s chaotic world, there is renewed interest in creating living spaces that are comfortable and feel like “home.”

Each weekend, you will find this self-described “fun and fortunate” lady in her “happy place” just off Highway 280 at the Harpersville crossroads. The rest of the week, she and Sonny – her No. 1 supporter and the person to whom she attributes her ability to do what she loves – are most likely on “the hunt” for exquisite additions to the store. Some of their recent jaunts include “bucket-list” trips to the famed Brimfield antiques show in Massachusetts and to Round Top, Texas. However, her favorite activity is playing with her 3-year-old grandson!

Barbara Adkins embraces her life in Shelby County just as you would expect a “black” sheep to – with energy, exuberance and just the right amount of naughtiness. And, she is making “history” all the way! Take a trip to Harpersville and get to know her.