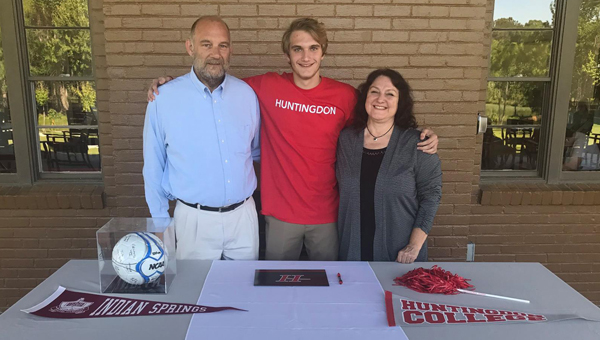 Heino, who was co-captain of Springs’ varsity boys soccer team, has been the team’s top goalkeeper for the past two seasons. He is also recognized as one of the top keepers in the state.

In the company of family, coaches and friends, Heino said the Indian Springs School soccer program has played a critical part in his success.

“Indian Springs gave me confidence and put their faith in me that I could be something that I didn’t think was possible: a varsity athlete, let alone a college athlete,” Heino said. “They gave me an opportunity, and it’s something I’ll forever be grateful for.”

Heino has helped guide Springs to an overall record of 21-2-6 with an area record of 8-0 this season. He also has racked up 188 saves and allowed only 14 goals with a save percentage of 93.

Heino and his Springs teammates won the 2017 state championship.

Indian Springs boys soccer head coach Rik Tozzi spoke proudly of the passion that Heino has displayed during his time at Springs.

“Without his efforts and his commitment to his passion for the sport, we undoubtedly would not be gathered here today to celebrate him,” Tozzi said. “As I’ve gotten older I appreciate people that are passionate and committed much more than those that are talented. Talent is given. Passion is something you find and commit your life to developing. Zak embodies this. He embodies Learning through Living.”