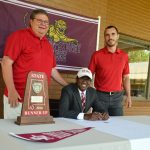 A member of Indian Springs’ golf team since ninth grade, Yerramsetti was 2016 Class 3A Sectionals champion with a score of 71.

He tied for third on the 2016 Class 3A Sub-State All-Tournament team with a score of 73. He achieved Top 10 at the 2016 American Junior Golf Association tournament at Chateau Elan in Atlanta, shooting 73 in every round.

He has been ranked as high as 11th in the state of Alabama for Class of 2017 Boys and has been named a Golfweek Top 1000 World Ranking Award recipient. He has also been invited to play in the 2017 British Boys Championship.

He placed second at the 2017 Class 3A Sub-State tournament, making the All-Tournament team with a score of 71. He will advance to compete as an individual at the 2017 AHSAA State Tournament.

Indian Springs School Boys Golf Coach Paul McGee told a gathering of more than 80 students, faculty and family members that Yerramsetti has grown tremendously as a golfer and a student over the past four years, but his passion for the game and for Indian Springs’ team has remained constant.

“On the golf course you can always rely on Varun to give you everything he’s got—he will never give up,” McGee said. “Golf is an individual sport, but the way Varun has worked for the team and the care he has shown for the team, always wanting the team to do as well as possible, is something that I’ve always been very impressed with.

“Off the golf course, his good heart and quick wit just make him a pleasure to be around,” he continued. “It really has been a pleasure this past four years, and I can’t express how happy I am that he gets to take his passion and go to the next level.”

“One thing that’s a little different about Varun is that he seems to rise to the occasion under the stress of tournament golf, which is unusual,” Flint said. “A lot of times people go the other way. He’s a great learner. It’s been fun watching him grow up. This is a happy day for Varun and his family.”

Yerramsetti said he is excited to attend Hampden-Sydney, which he believes gives him an opportunity to get a good college education while still improving his golf game. Leaving Indian Springs, though, will be bittersweet.

“I’ve been granted a wonderful opportunity not only to attend Indian Springs School, but also to participate on the varsity golf team,” he said. “It has been a blessing to play with these guys for the past few years, and I have learned a lot about golf, leadership, but most importantly, teamwork. Getting second in the state as a team [in 2016] and bringing home that red map was the most important thing we have ever done together. I am going to miss playing for Indian Springs.”