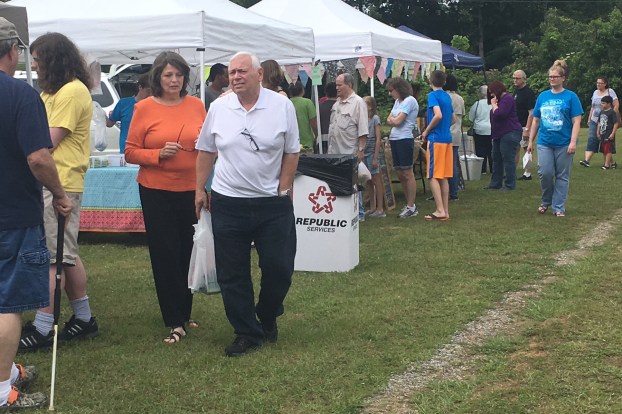 Visitors from all over the Shelby County area shop for produce and homemade goods at the first farmer’s market in Chelsea. (Reporter photo/Amalia Kortright)

CHELSEA- The city of Chelsea recently began hosting its farmer’s market every Thursday from 3 to 6 p.m. at Chelsea City Hall. According to organizers and Bee Creek Farm vendor Don Driggers, this is the first farmer’s market that has ever been held in the city.

“There just wasn’t one around. The closest one is across the mountain,” Don Driggers said. “I’m from Vincent, so I already know a lot of people who live here.”

Through the new farmer’s market, Driggers said locals now have the opportunity to shop for more organic produce.

“Everybody you see here who is selling produce grows it themselves,” Driggers said.

While the farmer’s market has only been around for three weeks, Driggers said it has brought people and vendors from all over the Birmingham and Shelby County areas to Chelsea.

“There has been a really good turnout, so far,” Driggers said. “We have vendors from Trussville to Columbiana. The people here are great, and this is a fun event.”

The youngest vendors, Alex and Jack Davis, said they had fun promoting their business, Two Brothers and a Dog, at the Chelsea farmer’s market. The two kids specialize in making soy wax candles and melts.

“It started as a hobby, and we found out that we really liked making candles,” Alex said.

“We wanted to start a business with that,” Jack added.

Don Driggers said this year’s farmer’s market will last until mid-July, and currently open for more vendors. Anyone who is interested in becoming a vendor can contact Driggers at 482-6943.