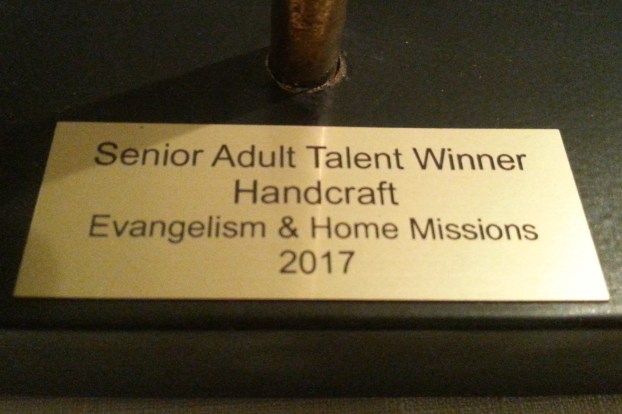 VANDIVER- Dunnavant resident Jacky Bradberry recently won first place for his homemade pocketknives in the handcraft category at the 2017 National Church of God Senior Talent Competition. Bradberry, who has been making pocketknives since December 2016, represented his church, Vandiver Church of God, at the state competition in Gardendale and the national competition in Gatlinburg.

“He said that nothing he did was about him,” his daughter, Brandy Whitfield, said. “He was just so excited to be able to do it for the church.”

While Bradberry has only been making pocketknives for about six months, he said he has been passionate about his hobby since he started.

“I made my first one for my grandson for Christmas, and it started from there,” Bradberry said. “I’m just particular about what I do. I’m not necessarily a perfectionist, but I want what I make to be useful.”

Bradberry credited the influence of his father and grandfather for his handcrafting talents.

“With anything we needed to do, we learned how to do it,” Bradberry said. “Growing up, we couldn’t afford to have other people do things for us.”

Pastor David Houston said he was proud of the way that Bradberry represented the church.