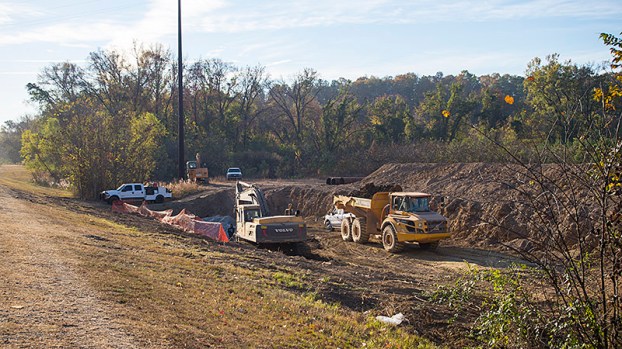 Construction crews work on a project to extend Fulton Springs Road off U.S. 31 in Alabaster in November 2016. The foundation of the roadway is now complete, and will be finalized once a utility line is moved from the property. (File)

ALABASTER – A project to extend Fulton Springs Road from its current terminus at Old Highway 31 to U.S. 31 south of the Propst Promenade shopping center will move into its final stages after a utility company moves one of its lines from the property, according to Alabaster leaders.

The Chilton Contractors company has already laid the foundation and curbing for the road, which will provide drivers on U.S. 31 a more direct route to Alabama 119 via Fulton Springs Road.

One telecommunications utility line is still running through the property, and must be relocated before the roadway project, which is being directed by the Shelby County Highway Department, can progress further, Alabaster City Manager Brian Binzer said during a June 2 interview.

Because the utility line also crosses over the railroad adjacent to Old Highway 31, the utility company must obtain a permit from and work with the CSX railroad company to schedule the utility relocation, Binzer said.

“Once they move that utility, they will be able to continue working full-bore on the road project,” Binzer said.

“Our hope was to have this project done before school started back, but it looks like it will end up being this fall,” Binzer said.

By NEAL WAGNER / Managing Editor ALABASTER – Looking at the weather forecasts each day leading up to Alabaster’s CityFest... read more