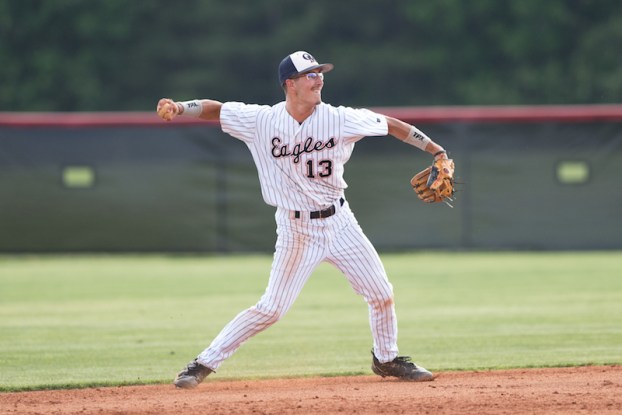 A historic baseball season has come to an end, and a special one it was for so many teams around Shelby County. We saw a state championship from the Helena Huskies in Class 6A, a school record for wins from several teams including Oak Mountain and Chelsea and a total of seven teams make the 2017 postseason.

This county’s success when it came to baseball this season could arguably be considered as the best county-wide baseball performance out of all 67 counties in the state. A lot of that success was due to the outlandish pitching performances we saw, which is reflected in the 2017 All-County baseball team. For that reason, we have decided to create five pitching positions on this year’s team as three wasn’t enough and honestly five was probably still too short of a list to highlight how strong the year of the pitcher actually was.

While pitching was strong, there were also some jaw-dropping performers at the plate and defensively in the field, which also shows off on this team. If a player didn’t make the team at all, or was honorable mention instead of a first or second teamer, it’s not a slight toward that player, but instead the fact that this was one of the most historic baseball seasons full of incredible talent that this county has ever seen. Congrats to those honored as one of the elite below.

Pitcher: Jacob Smith, Calera, junior. The co-player of the year has already signed with Vanderbilt and for good reason. He led the county in strikeouts for the second consecutive season with 123 and heralded a 9-2 overall record. Even more impressively he had an ERA of just .69 allowing just seven runs all year. He also spent time at first base and batted .355 at the plate with 38 hits and 25 RBIs. 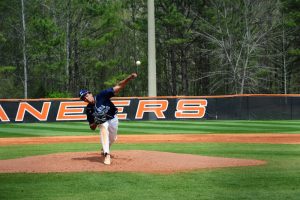 Co-Player of the Year Jacob Smith

Pitcher: Gene Hurst, Oak Mountain, junior. An impressive season for Oak Mountain was in large part thanks to Hurst’s impressive pitching on the mound. The Samford commit was the No. 1 guy in the Eagles’ rotation this year and went 9-1, a school record for wins, with four shutouts and a county-low ERA of .55. He struck out 79 batters this season and helped lead Oak Mountain to its most wins in school history for the second straight year. With 17 wins already and a season to go, Hurst already holds the career record for wins and shutouts. 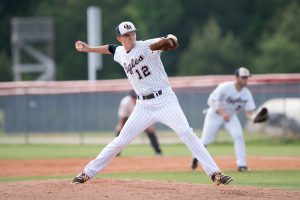 Pitcher: Ethan Davis, Vincent, senior. The senior from Vincent has definitely earned a spot on the first team after going a combined 15-3 over the last two seasons with an ERA under 1.00. This season alone he tossed a perfect game to follow up a no-hitter from last year and posted an ERA of .92 with a record of 7-2, while striking out 75 batters. 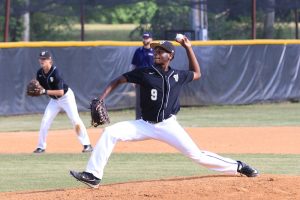 Pitcher: Sam Strickland, Briarwood, senior. Strickland was the county’s co-player of the year with Smith after an extremely impressive season with the Lions. With an ERA of .61, a record of 9-1 and 81 strikeouts, he and Smith were just too close to separate. He went 1-1 in the postseason and was able to keep Briarwood ranked No. 1 for most of the season as almost an automatic win. He and Hurst will be teammates at Samford in the future — talk about scary. 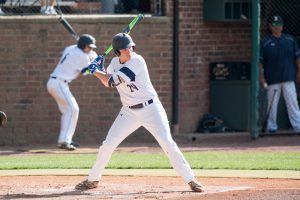 Co-Player of the Year Sam Strickland

Pitcher: Troy Cordrey, Helena, senior. The UAB commit held an ERA of 1.34, a record of 11-2 with three shutouts and was the leading pitcher on a rotation that dominated all the way to a state championship while facing off against the state’s best talent. He posted 70 strikeouts this season and allowed just 13 walks to make him one of the toughest pitchers to face. 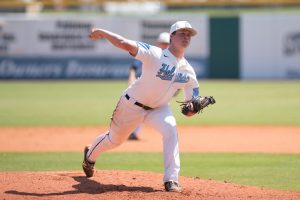 Catcher: Sam Praytor, Helena, senior. Last year’s Co-Player of the Year, Praytor absolutely destroyed opposing pitchers for the second consecutive season and received very strong consideration again. The Alabama commit batted .458 with 15 doubles and a county-high nine home runs. He also drove in 40 runs and picked up a total of 55 hits, while also scoring 20 more runs. His good eye at the plate as well as patience led to these opportunities as well as 37 walks giving him a strong on-base percentage. 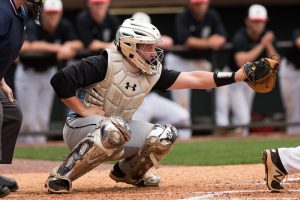 First Base: Tyler O’Clair, Calera, junior. O’Clair played all over the field in 2017 from pitcher to catcher to first base and he showed out at every position. Another one of Calera’s strong up and comers, he is committed to UAB going into his senior season. At the plate he batted .372 with an impressive 42 RBIs on 45 hits, while striking out just 13 times all season. On the mound, he was their No. 2 guy behind Smith and tossed 50.1 innings striking out 68 and posting an ERA of 2.086 and an overall record of 5-2. 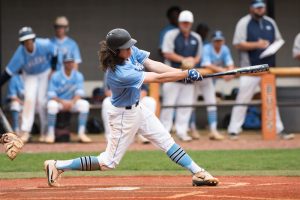 Second Base: Saylor Carroll, Vincent, senior. As one of the best second basemen nominated, Carroll batted .340 at the plate with an on-base percentage of .418. He had 33 hits with 10 doubles, 12 RBIs and 34 runs scored on the season. He was also one of the better base stealers in the county converting on 21 of 23 attempts. 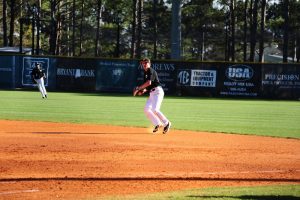 Shortstop: Jacob Rich, Spain Park, senior. When nominations came in, Rich was one of the player’s coaches from several different teams mentioned. The senior batted .364 at the plate with 31 singles, eight doubles, 20 RBIs and 31 runs scored. He also added 16 stolen bases and 19 walks offensively. Rich was one of just two batters on the Jags’ team to hit above .300 this season. 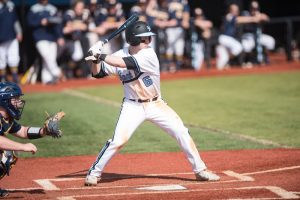 Third Base: John McDonald, Oak Mountain, senior. The senior is now headed off to Austin Peay, but not before he broke another school record with the Eagles. McDonald’s impressive year was highlighted by setting the school record for RBIs in a season with 45. He did so after batting .350 at the plate with 15 doubles, two triples and four home runs. He picked up a total of 49 hits and added 29 runs to his 45 RBIs, while only striking out 12 times in 140 at bats. 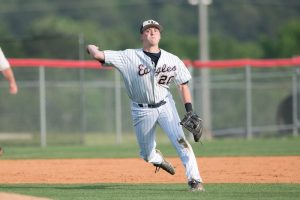 Outfield: Cole Steadman, senior; Carson Eddy, junior, Briarwood. This is the first of two outfield positions occupied by two players and for good reason. Both of these guys from Briarwood hovered around a .400 batting average and weren’t worth booting somebody else off the first or second team. Eddy batted .398 at the plate with 34 RBIs and 36 runs scored. He was responsible for nine doubles and five triples and had an on-base percentage of .500. Steadman was a touch higher with a batting average of .402 and 35 RBIs on the season after picking up 41 hits including eight doubles. 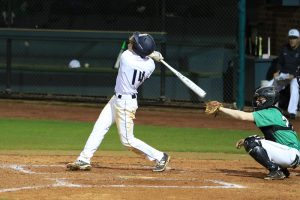 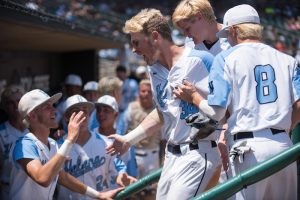 Ragsdale, No. 34, celebrates during the state championship series.

Outfield: Ethan Holsombeck, Oak Mountain, senior. Another one of the guys who batted over .400 this season with an average of .410. Holsombeck had 30 RBIs with 55 hits, including 17 doubles, one triple and three home runs. His 50 runs scored this season were a school record and he also graduates with the school record for hits in a season with 62, which he set in 2016. 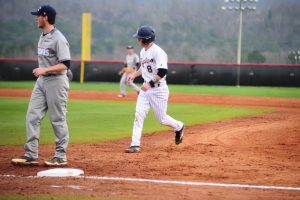 DH: Quin Darius Crews, Calera, freshman. As a freshman, Crews was just too valuable to keep off the field and eventually earned a spot in the lineup. He batted an unbelievable .467 at the plate with 35 hits and 18 RBIs, while also adding 15 stolen bases. He only played in 27 of their 38 games, but became a strong presence down the stretch of the season. 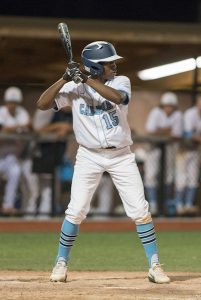 Pitcher: Will Battersby, Spain Park, senior. Went 5-2 this season with an ERA of 1.703 and 52 strikeouts. Another name that came up among several different coaches. Also batted .325 with 24 RBIs.

Pitcher: Joseph Hartsfield, Oak Mountain, senior. Hartsfield is a second teamer that was up for player of the year, showing how strong he and this class of pitchers was. He set a school career record with 190 strikeouts in a season. He is 3-0 with one no decision in four career playoff games with an ERA of .23 and 39 strikeouts. This year alone he went 7-0 with a 1.31 ERA and was second in the county with 89 strikeouts and three shutouts. 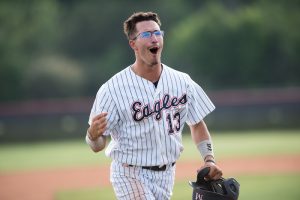 Pitcher: Riley Davis, Helena, senior. Went 7-1 this season and came in clutch during the state championship series with Cullman. Held an ERA of 1.44 and struck out 42 batters, while posting a team-high four shutouts. 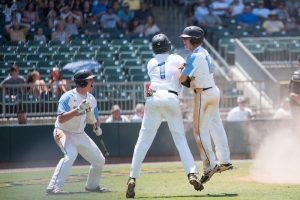 No. 1 Davis celebrates with teammates during the state championship.

Pitcher: Landon Green, Helena, junior. Green, another Samford commit, was 11-0 this season with one save and also came in clutch during the state championship series with Cullman. He posted an ERA of 1.44 for the Huskies as well and struck out 44 batters in just 48.1 innings pitched. 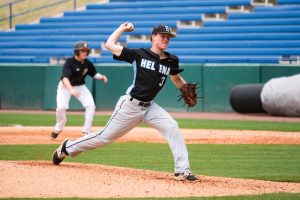 Pitcher: Sam Towery, Chelsea, junior. Towery was Chelsea’s leader on the mound during their strong run in the regular season and postseason. Went 7-3 with an ERA of 2.817 and 41 strikeouts in 54.2 innings pitched. 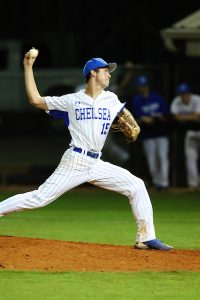 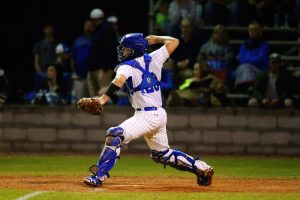 First Base: Kasey Clark, Pelham, sophomore. A young star for Pelham, Clark batted .329 with 21 RBIs and 25 hits including seven doubles.

Second Base: Will Glasscock, Calera, senior. Not as strong of a year as last year, but Glasscock batted .298 at the plate with 13 RBIs and also had 25 stolen bases with a fielding percentage of .948 at second base. 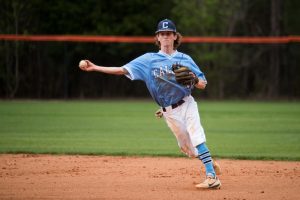 Shortstop: Jordan Deaver, Shelby County, senior. Had a strong average of .370 at the plate with 20 singles, six doubles and 18 RBIs, while scoring 16 runs. 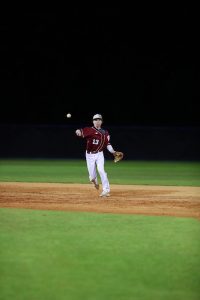 Third Base: Cole Fincher, Vincent, junior. Fincher was a strong pitcher and third baseman for the Yellow Jackets. Had an ERA of 1.86 on the mound with 37 strikeouts and a record of 5-2. At the plate he batted .304 with 28 hits and 11 RBIs. 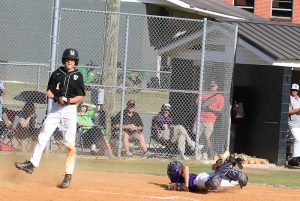 Outfield: Caleb Floyd, Oak Mountain, senior. Batted .353 at the plate with eight doubles, a triple and two home runs, which led to 26 RBIs and 29 runs scored. He went 5-1 on the mound with three saves and 43 strikeouts posting an ERA of 2.083. 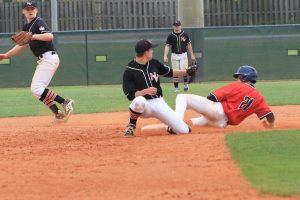 Outfield: Ahmad Edwards, Montevallo, junior. Had a batting average of .333 with six doubles, two triples and two home runs. Edwards went off for 19 RBIs and also stole 20 bases. Defensively he held a fielding percentage of .966.

Outfield: Myles Brown, Thompson, junior. Second on the Warriors’ team with a batting average of .313, while leading Thompson in stolen bases with seven. He totaled 36 hits and 17 RBIs. 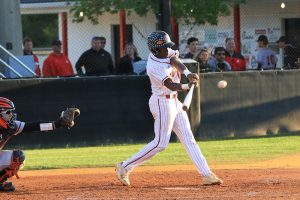 DH: Christian Hall, Calera, sophomore. Hall, who is committed to Alabama, is part of Calera’s young wrecking crew. He batted .336 this season with 11 doubles and a team-high three home runs and 29 RBIs. 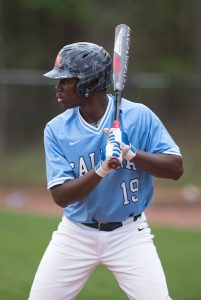 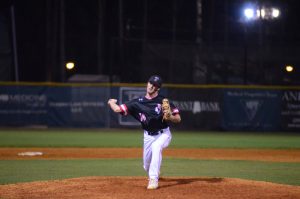 By JENNIFER MAIER / For the Reporter “I love helping people, it’s who I am and it’s what I want to do,”... read more