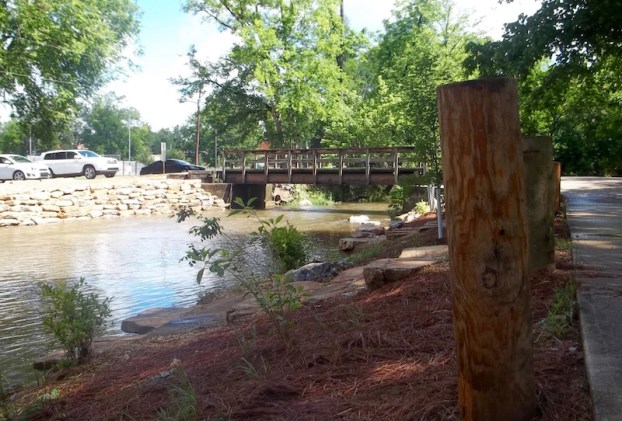 Steps in the foreground lead to Shoal Creek as sandstone slabs hold the opposite bank against erosion in Orr Park. (Contributed/Nancy Wilstach)

The nearly-finished creek bank project gives more than a cosmetic flourish to one of the city’s much-loved areas. Sandstone slabs wedged horizontally into the banks, the new plantings and the new posts are helping to mitigate erosion along Shoal Creek.

Dee Woodham, the former city councilwoman who now heads up the Montevallo Development Cooperative District, said the germ of the project was born when she was still on the council. Representatives of the Freshwater Land Trust had visited the city, and, during a park tour, she asked advice about management of the area along the creek.

“That part of the park has just about been loved to death,” she said. Trees were dying because the soil around their roots was washing away, she said.

A stretch next to the pedestrian bridge near the gazebo had a retaining wall that leaned precariously, threatening a sewer line behind it; some parking on the creek’s north side between the bridges was gradually disappearing. Spots where once you could have parked a Ford-350 with ease had become hardly fit for a Honda FIT.

In short, it was way past time to do something.  Thank goodness those Land Trust folks had a suggestion.

“They advised us what type of grant to apply for,” Woodham said. Besides the MCDC, the partners include the Water and Sewer Board, the county, the Arbor and Beautification Board and the University of Montevallo. The “Shoal Creek Stream Enhancement Project” received a $50,000 National Fish and Wildlife Foundation grant.

The job still isn’t finished—with some dredging to deepen the channel coming this summer.

Visitors to the park will notice that the banks are now mostly lined with slabs of bright sandstone; sturdy short posts erected by Shane Baugh’s Parks and Recreation Department, line the creekside path.

The stones, and coconut matting between them, support the banks while native plants in the matting take deeper root in the banks’ soil. By the time the matting rots, the roots will be firmly snuggled into the bank, strengthening its resistance to rushing water.

Look carefully at those posts, and you will note a pattern. The areas where they are farthest apart coincide with sandstone steps that lead into the creek. Except for these access points, chains eventually will link the posts.

Sure, nobody is supposed to swim in the creek. However, when the temperature is 100 degrees and the sun is broiling, more than a few youngsters—and some of us not-so-youngsters—cannot resist the temptation at least to take off our shoes and wade.

Thanks to this project, those toes in the creek are less likely to trample plants trying to get established on the banks.

By NANCY WILSTACH / Community Columnist Don’t get upset this summer if you see teens drawing and painting all over... read more