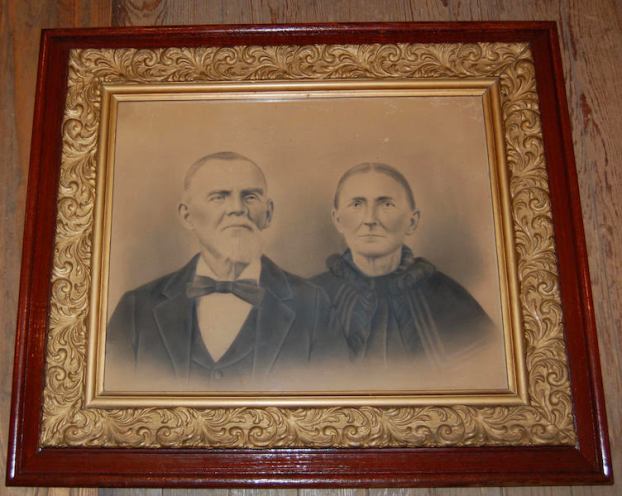 “Mt. Calvary Missionary Baptist Church was founded in 1856,” wrote Shelba Shelton Nivens in Early Settlers of the K-Springs/Chelsea Area. “According to Johnnie Harper, daughter of Marlin Mooney (son of Calvin L.) founders of the church were members of the Mooney, Stone, Minor, Shaw and Moore families.”

On May 13 past, 161 years later, descendants of Calvin Mooney were joined by other descending families to share “Homecoming and Dinner-on-the-Grounds.”

“One of the best things was the many new faces present representing several of the pioneer families that go back to the founding days of Mt. Calvary,” said Stephanie Phelan. “When we first started these gatherings, it was mostly descendants of Calvin Lee Mooney, but over the years many more have come; some from Moores, Minors, Kendricks, Thomases, Armstrongs, Farrells, Shirleys and others. The other encouraging thing was that there were a few younger faces in the crowd, which is very good for the future of this historic place.”

“The highlight for me was the fellowship with friends and family I haven’t seen in two years,” said facility caretaker Norma Jean Harper Howell. “I always enjoy greeting everyone and visiting during the ‘Dinner-on-the-Grounds.’”

Howell is the daughter of Johnnie Mooney Harper, mentioned above.

Mrs. Howell and others shared “family stories and remembrances” from years past. Allan Staib recounted the earliest history of the congregation. Though the property was deeded in 1856, and the establishment date is often taken from that, “We know that the congregation was formed as early as 1852 so it is likely that there was already a log structure on the

site at the time the land was deeded. Oral history tells us that the original building as well as the current structure which replaced it in 1901, served both as a church, school and post office. This building would have been the center of social life in this small community.”

Martin also related to us her highlights of the day; “First time attenders were Richard ‘Dickey’ Mooney and his wife, Elizabeth Smith Mooney. There was great excitement when they removed from their car a huge picture of Calvin and Elizabeth Mooney in its original frame. Richard is the … great-great-grandson of Calvin Mooney. This current digital age allowed many of us to use our cell phones to take a photo of this marvelous old treasure.”

“We’ve been having these homecomings since I was a child,” said Howell, who proclaims herself ‘the only living person who was a member of the church.’ We used to have them every year on Mother’s Day. Now we have them every two years on the second Saturday of May.”

Chelsea turns out to clean up

By TONY NIVENS / Community Columnist Four vans of volunteers spread out from Chelsea City Hall on Saturday, May 6.... read more