Don’t get upset this summer if you see teens drawing and painting all over the side of a building.

Most likely, what you see is NOT vandalism. It is art. 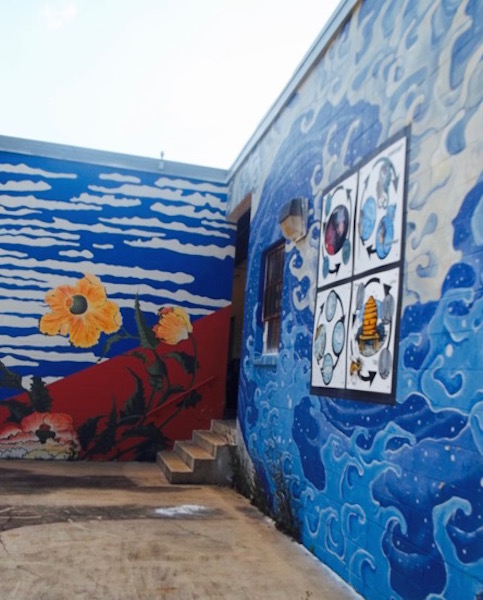 Chances are that it is not only perfectly legal, but part of the youngsters’ summer educational experience in Mural Camp, a program of the Montevallo Office of Service Learning and Community Engagement in partnership with the Montevallo Arts Council.

“The mural that is on the Subway building was painted three years ago through the collaboration of my Community Arts course and local children attending the first Montevallo Mural camp,” said Art Professor Collin Williams. “To date, we have had three mural camps, and this summer’s camp will make the fourth.”

The mural on the north side of the Subway building next to McDonald’s is “a celebration of Alabama native species,” Williams said. “A mural at the corner of Shelby Sreet and Main Street celebrates Montevallo’s sister-city partnership with Echizan, Japan.”

Others include murals at the UM Community garden, at Ebenezer Swamp and in the atrium of Montevallo Elementary school.

“This summer we are painting a mural on the side of the building that is near the northern entrance to Orr Park, and we are finishing a mural at the UM Recycling center that depicts the Montevallo Art Council’s logo,” he said. The campers also will be installing a patio in the Recycling Center pollinator garden.

Williams teaches the Mural Camp alongside a college summer course in Community Arts–which is five weeks. Two of those weeks coincide with the camp, and the college students work with the younger artists.

Mural campers are students in fifth through 12th grades. Camp sessions are June 5-9 and June 19-23. Campers can attend one or both, according to Kelli Holmes, director of partnerships in the service learning office.

While this group of youngsters flexes its artistic muscles, other activities for pre-college youngsters will be under way.

UM is hosting its 14th annual Young Musicians Camp June 18-23. That camp is a residential one with youngsters getting a taste of dorm life as they polish their musical skills under the tutelage of professionals and academics.

Pretend that band class lasts all day … the kids will have ensemble and private instruction during the day and cookouts, swimming and socializing at night. Youngsters with All-State Band and Choir on their resumes are eligible for scholarships. New this year at the musicians’ camp is a music technology program.

And, if that is not enough technology, UM also is offering Computer Coding Camp. The youngsters in this camp can expect to be introduced to coding for computers and to learn how coding intersects their critical thinking skills. The camp, July 17-20, is for students entering sixth through eighth grades.

The UM web site describes the coding camp as “stimulating, hands-on, education” and is designed to initiate youngsters into coding even if they have little or no experience.

These summer programs draw youngsters who may decide to attend UM for their college education, so let’s be good neighbors and wish them well as they try on new experiences to see how they fit.

Check it all out at: montevallo.edu/camps.

By NANCY WILSTACH / Community Columnist For 120 years, the elegant white brick church stood at the corner of Alabama... read more